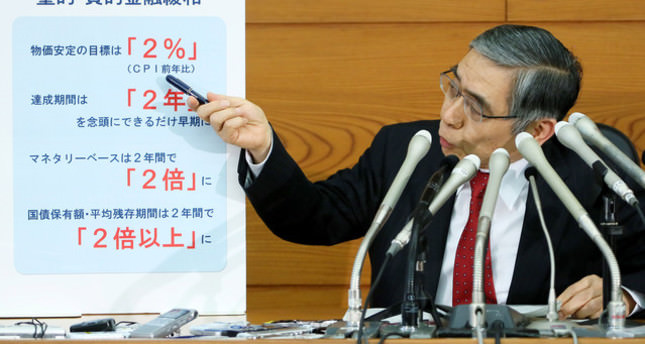 Despite GDP data released on Monday showing that Japan’s economy had shrunk an annualized 1.6 percent in the third quarter, the Bank of Japan decided to stand firm on their current monetary policy after a meeting held yesterday

After a two-day meeting, the Bank of Japan (BoJ) has decided to maintain their current asset purchasing policy. The decison comes a day after Prime Minister Shinzo Abe called for snap elections next month and announced that the national sales-tax hike expected for October 2015 will be delayed.

Abe's comments undoubtedly came in the wake of two consecutive quarters of negative growth data, in spite of growth projections of 0.5 percent, which showed Japan's economy contracted by annualized rates of 7.3 percent in the second quarter and 1.6 percent in the third quarter, instilling further skepticism toward Japan's growth project, often referred to as "Abenomics."

The contractions are largely attributed to a tax hike in April by the government that boosted the general national consumption tax level from 5 percent to 8 percent and caused the economy to grind to a halt. The tax hikes are part of the Abe administration's effort to bring its fiscal debt, which has been growing at a rate of 8 percent of GDP yearly, in order.

Answering questions from reporters at a news conference on Wednesday following the meeting, Bank of Japan Governor Haruhiko Kuroda - Abe's hand-picked chief - said, "I'm not going to comment on a decision made by the government," reaffirming the bank's independence but raising questions over how robust cooperation is between the two blocs in respect to Abe's "three-arrow" recovery approach. "But, generally speaking, it's important to maintain confidence in Japan's finances. I still expect the government will implement measures [to pay back its debt]," Kuroda added.

Kuroda said that the bank's stimulus program was having the anticipated effect on the economy, while quashing naysaying by citing bank forecasts that suggest the economic outlook looks much more positive in the long term.

Kuroda's statement that Japan's economy was still on track to recovery seemed quite optimistic in the wake of the BoJ statement issued earlier in the day. Although his comments were a little more bullish than other views within the bank, there seems to be a general consensus that inflation expectations "appear to be rising on the whole from a somewhat longer-term perspective."

According to a statement following the two-day monetary policy meeting, the BoJ seemed to be more positive regarding the outlook, saying, "Japan's economy has continued to recover moderately as a trend."

"Some weakness particularly on the production side have remained, due mainly to the effects of the subsequent decline in demand following the front-loaded increase," the bank said, referring to the April tax hike.

The bank's meeting was not without drama, as four of the nine board members were less agreeable to advancing the stimulus; however, Kuroda managed to pull eight of the nine dissenters into line, ending the meeting on near consensus. "While board members noted that some weakness on the production side remained, they upgraded their views on exports, housing investment and private consumption," Marcel Thieliant from Capital Economics told AFP.

Thieliant added, "The statement suggests additional stimulus in the near-term is not in the cards."

The bank's monetary stimulus program, which was massively expanded late last month after the government announced it would make annual asset purchases of 80 trillion yen - up from its original 60-70 trillion yen target range - has put further pressure on the country's debt level - already at a staggering 240 percent of gross domestic product - also causing volatility in bond markets and driving down the value of the yen. The yen fell as low as 117.44 to the dollar, down 0.4 percent on the day to its weakest since October 2007, which had also reached record lows last week, finishing up at 117.32 later in the day with the euro following similar trends increasing to 146.96 yen in the day. Tokyo's Nikkei index dropped 0.32 percent, ending the day at 17,288.75 after the BoJ decided to keep its monetary policy steady.