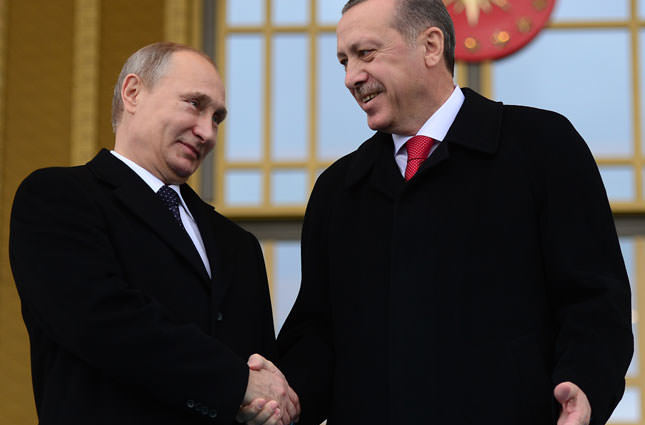 The flourishing commercial ties between Turkey and Russia were underlined by President Putin’s visit to Turkey. During discussions between President Erdoğan and Putin, several agreements were signed to further cultivate bilateral trade

Earlier in the day, Erdoğan personally welcomed Putin for the one-day state visit at the gates of his controversial new presidential palace in Ankara, with the Russian leader only the second dignitary to visit the new palace after Pope Francis on Friday. The meeting is the first time the pair have met face-to-face since Erdoğan moved from the post of prime minister to president in August, two years after Putin himself made the same transition.

Putin, heading a delegation of 10 Russian ministers, visited Turkey to discuss the realization of tripling bilateral trade to a target of $100 billion by 2020, from $32.7 billion in 2013, making Russia Turkey's second most important trade partner. Talks focused on energy cooperation, with Ankara seeking not only a reduction in gas prices from Russia but also greater import volumes ahead of the winter.

Turkey, the second largest European importer of Russian gas after Germany, wants more but cheaper gas from Russia, especially in the current winter season. Turkey imports approximately 61 percent of its natural gas from Russia. Energy Minister Taner Yıldız said in a visit to Moscow last week that in some Turkish regions 22 times more gas is needed in winter than in summer. Gazprom had promised to increase deliveries this year to Turkey to 30 billion cubic metres of gas, up from 26.7 billion last year.

The Minister of Economy Nihat Zeybekci last week met with the Russian Minister of Economic Development Aleksey Ulyukayev and told press members in Moscow that his meeting had been "very rewarding." Zeybekci further noted that the visit was planned before Putin's visit to Ankara for the Turkey-Russia High Level Cooperation Council meeting.

The five-article agreement, which has been deemed as having historical importance by Turkish Economy Minister Nihat Zeybekci, has been signed by the leaders of both countries. The agreement focuses on signing preferential trade agreements in certain fields including legal negotiations related to the free trade agreement, discussion of problems that prohibit trade between the two countries; the banking system in trade, investments and finance between the two countries and also using national currencies in trade. Technical teams from both countries will hold monthly meetings in order to follow up the agreement.

The agreement has been prepared to eliminate any obstacles that may be encountered while the $100 billion trade target is trying to be achieved between the two countries and both countries will accept the related certificates.

"Russia is subject to the Eurosian Customs Union and Turkey is subject to the Customs Union with the European Union. Protecting both of these balances, we are now trying to achieve the maximum free trade volume possible between the two countries. We believe there should be no obstacles between such two great economies that are neighbors of each other. And Turkey has almost everything Russia is lacking and Russia has everything Turkey is lacking, therefore, we believe we have to maximize our mutual benefits by bringing these two countries together, thus creating a multiplier effect" said Turkish Economy Minister Nihat Zeybekci.