A new era with Russia is beginning, says minister 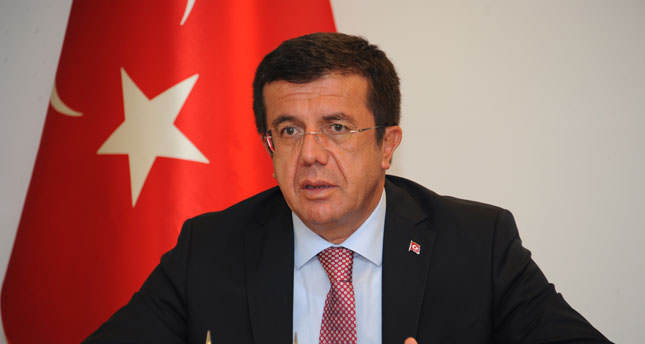 by Daily Sabah with AA Dec 04, 2014 12:00 am
Economy Minister Nihat Zeybekci has said that "a new page has been turned with Russia." He made the comments when speaking to Voice of Russia about decisions taken during Russian President Vladimir Putin's visit to Ankara. According to Zeybekci, this is a new era in terms of bilateral relations between the two countries, especially regarding free trade, the use of national currencies, establishing common funds, transport quotas and accreditation certificates.

"If there is common economic ground that both countries can benefit from and if the bilateral relations are based on such common grounds, then the relations are secure and are sustainable. Therefore, instead of temporary solutions, a strong common ground should be built, and I believe we now have such a chance," Zeybekci said.

Underscoring the fact that Russia has everything that Turkey cannot produce and Turkey has all the resources and goods Russia lacks, Zeybekci said that if Turkey and Russia act together in Eurasia, Asia, the Gulf, North Africa and the Balkans, they can "achieve a great deal."

Stating that this is the first time that a free trade agreement has been brokered between the two countries, Zeybekci said that free trade agreements in services, investments, agriculture, public purchases and metal groups - iron, steel, copper and aluminum, which are all part of the Eurasian Customs Union - are being discussed.

"In this respect, negotiations will continue with both Russia and the Eurasian Customs Union. Turkey will benefit from this, as this means removing all trade obstacles between the two countries: no customs, no quotas," Zeybekci said before adding that establishing a common fund to finance works, to be undertaken by Russian and Turkish companies together in third countries, was imperative.

Zeybekci also emphasized that using national currencies in trade deals is being discussed, but first central banks should formulate how such steps should be taken. Transportation quotas and both countries accepting each other's certificates are additional matters being discussed, and Turkish and Russian deputies will meet in Istanbul on December 8.

Prime Minister Ahmet Davutoğlu said at conference yesterday that NATO always consults Turkey in global uprisings; therefore, it is not acceptable for Turkey to be excluded from the Transatlantic Partnership Process.

"The economic relations we developed with our neighbor Russia are not an alternative for any other economic partnership. Turkey's first priority is gaining full membership into the European Union and with this full membership, and then entering into transatlantic investment and trade partnerships. We are extremely determined.

"Political stability is one of the main tools for subsidizing investments together with economic stability. If stability in Turkey is not based on democracy, other problems could arise. Our main target is to maintain this stability and ensure that the business world is capable of planning ahead," Davutoğlu said.