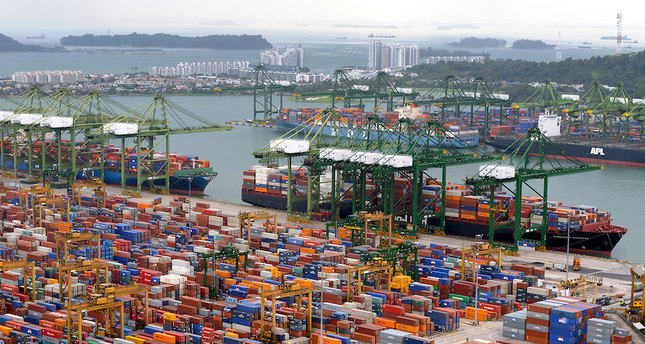 A new survey claims Istanbul’s crippling traffic, one of the biggest problems for the country’s most populated city, leads to a TL 6.5 billion economic loss

Exports rose 4.7 percent from a year earlier, while imports dropped 6.7 percent, the biggest drop since March, data released by the General Administration of Customs showed on Monday.
This left the country with a record trade surplus of $54.5 billion, which analysts say could increase upward pressure on the yuan even as exporters are struggling.

"Despite another record surplus, the details paint a grim picture with slower export growth and a contraction in commodity imports in volume terms," said Andy Ji, senior currency strategist at Commonwealth Bank of Australia in Singapore.

Exports have been the lone bright spot for China's economy in the last few months, perhaps helping to offset soft domestic demand, but there have been doubts about the accuracy of the official numbers amid signs of a resurgence of speculative currency flows through inflated trade receipts.

Dariusz Kowalczyk at Credit Agricole CIB in Hong Kong said over-reporting in exports may have been curbed in November, which contributed to a weaker reading. But he added that the import contraction was "shocking", reflecting not only lower commodity prices but poor domestic demand.

"This means that pressure will rise on the government to do more to stimulate growth," he said. "We expect a reserve requirement ratio cut in December, introduction of reverse repos this week, and another rate cut in the first quarter. The yuan should rise further on the data."

After saying for months that China does not need any big economic stimulus, the People's Bank of China (PBOC) surprised financial markets by lowering rates on November 21 to shore up growth and help firms pay off mountains of debt. The government is due to release data on factory output, fixed-asset investment and retail sales later this week.

Analysts see more policy support in coming months if the economy continues to stumble, with many expecting both more rate cuts and reductions in banks' reserve requirement ratios (RRR). Hopes of more stimulus have pushed China's benchmarket stock indexes to their highest in more than three years.

Sources familiar with China's policy-making said leaders are prepared to lower rates again and loosen lending curbs on concerns that falling prices could cause a spike in bad loans, business failures and job losses. "We expect at least one more policy rate cut, 2-3 RRR cuts and targeted measures (to inject more liquidity into the banking system) throughout 2015," said Haibin Zhu at J.P. Morgan.

Annual economic growth slowed to 7.3 percent in the third quarter, the weakest since the global financial crisis, weighed down by a sagging housing market and tighter credit conditions. Full-year growth is on track to undershoot the government's 7.5 percent target and mark the weakest expansion in 24 years. The slowdown is expected to persist well into next year.

China's leaders are reluctant to repeat strong stimulus similar to the one implemented during the height of the global crisis, which resulted in piles of debt, but they are mindful of the risk that a sharper growth slowdown could undermine reforms.

The leadership is due to open a key meeting on Tuesday to map out economic and reform plans for 2015, including economic targets which will be unveiled in parliament next March, sources at top government think-tanks said. Government think-tanks, which make policy proposals, have urged Beijing to cut its economic growth target next year, probably to around 7 percent.