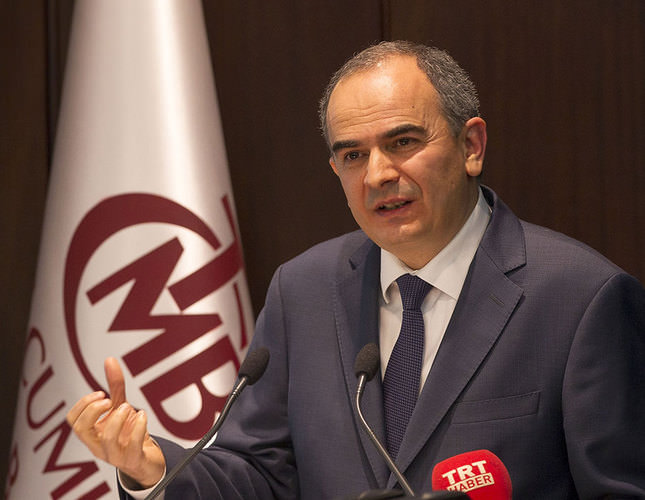 by daily sabah Dec 10, 2014 12:00 am
The Governor of the Central Bank of the Republic of Turkey, Erdem Başçı, held a press conference yesterday to announce monetary and rate policies for 2015. During the event, the governor called attention to the two major risks of the normalization of the U.S. Federal Reserve's (FED) policy and obstacles within the agriculture sector.

Noting that tight monetary policies will continue to be applied, Başçı said that the growth rates announced on Wednesday have confirmed that there will not be any additional pressures on inflation. Moreover, the central bank is forecasting a better growth rate in 2015 as well as an increase in foreign direct investments. He further noted that the rates predict that inflation rates will stay around the expected levels due to decreasing crude oil prices – possibly around 5 percent. A decrease of around $10 in oil prices is also projected to decrease inflation by around 0.4 to 0.5 percent. Next year, such developments are likely to improve the external economic balance, which has already achieved sustainable and gradual improvement.

Başçı emphasized that they are expecting a steep drop in inflation rates in the first four months of 2015, and that the main problems Turkey will confront are the FED's policies being normalized and agricultural and food prices. The agricultural products' share of GDP in the 3rd quarter was higher than in the previous, which is one of the main reasons why the GDP in the 3rd quarter is lower than expected. The govenor said that they are ready for the FED's policies, even if the FED delays tightening them. However, the drop in agricultural yields is also pushing inflation up, which is why they will be focusing more on decreasing the prices of agricultural products. The circular issued by the Prime Ministry on foodstuffs published on Tuesday is crucial in this respect.

Low global interest rates are also an advantage for Turkey, yet people should be cautious about borrowing. Inflation is expected to be over 5 percent and Başçı said that the first figures indicate that the inflation rate will be around 8-9 percent. Additionally, the central bank wants stable foreign exchange rates and many tools have been created to stop such volatile rates. "The financial discipline also appreciates the Turkish lira and stability depends on supply and demand of the lira," added Başçı.

He further announced that until a significant improvement can be achieved in inflation rates, the yield curve will be kept close to horizontal. The tightening of the liquidity policy has also helped decrease long-term interest rates and inflation – excluding food products – as well as food products' inflation rates will undergo a crucial change in 2015. The data from December will prove that all of these factors will push inflation rates down.

Pointing out that in an environment where global interest rates are low, Başçı said that cautious borrowing would be beneficial in terms of balanced growth, fair income distribution and employment. "We believe that a credit growth rate around 15 percent is sustainable," Başçı noted. The aim is to improve the growth rate by ensuring that more loans with better conditions are granted for financing production instead of consumers, and the governor underscored that since February, the growth rate of commercial loans is higher than the growth rate of consumer loans.

Additionally, an increase in investments in the first quarter of 2015, balanced growth and export-based growth are all to be achieved in 2015, and the demand in consumption is expected to remain at a moderate level. "The tools we will utilize for achieving stability in borrowing is supporting core liabilities of banks, reserve options, foreign exchange repo market and the purchase and sale of foreign currencies. We adjust the reserve holding speed with the purchase and sale of foreign currencies and lately we have decreased our reserve holding speed. The rate of foreign exchange reserves meeting exports is looking good and the reserves meeting short-term foreign debt is around 90 percent, which has been criticized; yet, this will change when the maturity terms of foreign debts increase. This is our game plan for ensuring financial stability in 2015," Başçı said.

Underscoring that it is much better to ensure balanced, gradual and moderate growth than unbalanced growth, Başçı noted that in the 3rd quarter of 2014, there was a slight improvement in consumption and investment, which will be better in the 4th quarter. Furthermore, other good news is that saving deposits in Turkish lira will be above 10 percent and the savings will also moderately increase.

On foreign exchange rates, Başçı said the central bank does not currently have an estimation, but are closely following the rates that they would prefer remain stable. The Reserve Option Coefficient will compensate the required reserve amount and while foreign demand is crucial in terms of balanced growth, the current weak foreign demand ratio is adding pressure according to Başçı.

Başçı also underscored that draught was not the only problem in agriculture, and the difference between the prices of the consumers and prices of the producers was important. Regarding the volatility that was experienced following the announcement of the American employment data, Başçı said they predicted this would not be a good month for holding reserves; thus, the central bank increased foreign exchange purchases to $40 million and desire growth rates to increase swiftly. "We believe the prerequisite for growth is price stability, and as of next year, Turkey's potential to grow will increase," Başçı concluded.