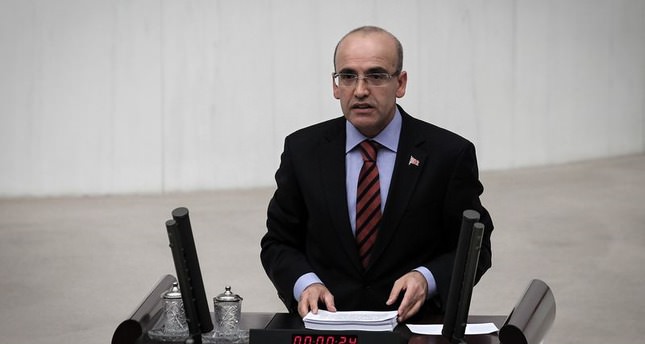 by AA Dec 10, 2014 12:00 am
Turkey will be able to hang onto its 3.3 percent growth target rate during its medium-term economic program despite the weaker than expected third-quarter figures, Finance Minister Mehmet Şimşek said Wednesday.

Addressing the plenary session of the Turkish parliament on the 2015 budget, Şimşek said the weaker than expected third-quarter growth figures were actually not far from the targets projected in the medium-term economic program.

"Today, the third-quarter figure was announced at 1.7 percent. This is actually close to our projection of 2.2 percent. The deviation in this figure is largely related to the agriculture sector," he said.

"So, we see a growth performance close to the medium-term economic program targets still as realistic," he added.

He recalled that the global institutes too had one-by-one lowered their global growth forecasts over the forthcoming period.

Şimşek said the persistent weak economic recovery in Europe, the slowdown in growth in emerging economies, especially in China and the geopolitical crises were the major risk factors for global growth and emerging economies.

He pointed out that the downgrade in growth forecast was not limited to Turkey. The International Monetary Fund too had recently cut its growth expectation for both developed and emerging economies, he added.