Business 20 meeting to be held in Istanbul on Monday 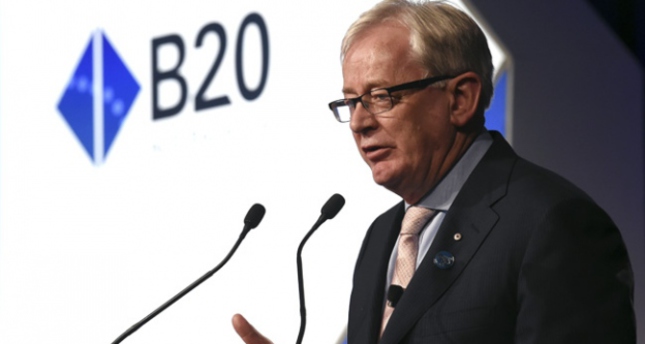 by Daily Sabah Dec 13, 2014 12:00 am
The inaugural meeting of the B20, which is the business world branch of the G20 Turkey, will be held in Istanbul on Monday, Dec. 15. According to a statement from the Turkish Union of Chambers and Commodity Exchanges (TOBB), Assistant Chairman of TOBB and B20 Executive Board Chairman Rifat Hisarcıklıoğlu will preside over the meeting, which more than 300 businessmen will attend. The meeting will bring together global business leaders and Turkish business leaders and will last for the whole day under the moderation of Hisarcıklıoğlu. There will be a question-answer session with Deputy Prime Minister Ali Babacan and a presentation by the members of the B20's executive board on Turkey's priorities for B20.

Afterwards, a panel, called the Business World's Expectations from the B20, will be moderated by Janamitra Devan, with the participation of Terry McGraw, Peder Holk Nielsen, Daniel Funes de Rioja, Güler Sabancı, Ferit Şahenk.

In the afternoon, a B20 Turkey Task Force Introduction Session and a panel on "How to Improve G20-B20 Interaction" will take place under the moderation of John Danilovich with the participation of Eric Labaye, Hüsnü Özyeğin, Murat Sönmez, Alexander Shokhin, Melih Yurter and Sabine Zindera.

After the meetings, the representative of state presidents in the G20 will come together with the B20's business world leaders.