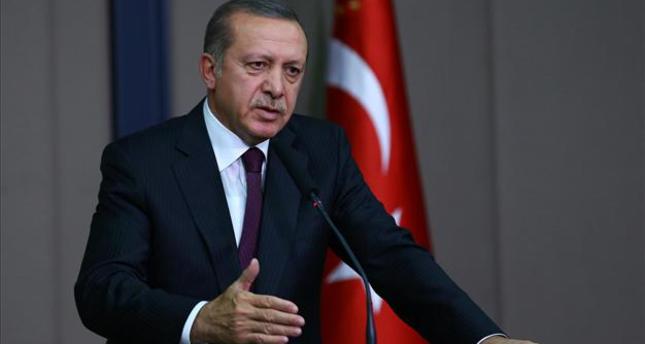 by Daily Sabah Dec 13, 2014 12:00 am
President Recep Tayyip Erdoğan addressed the participants at a meeting held with the members of the Turkish Union of Chambers and Commodity Exchanges (TOBB) at the presidential palace in Ankara. He noted that the government is willing to listen to the problems of all parties included in the Turkish economy, and discuss possible solutions. Touching on the importance of improving the welfare of the whole population and not just a certain income level, Erdoğan said they will not permit high inflation, and will thoroughly analyze the economy.

"The recent coup attempts did not target the government or any other political party, but were aimed at damaging the welfare and stability established in Turkey within the last 15 years. These attempts targeted our growing economy, our stability," said Erdoğan. He added that while in the past, these forces took advantage of high interest rates, high inflation rates and the low export levels in Turkey, as this is not the case anymore, they are trying other methods to obstruct Turkey's growing economy.

Erdoğan noted that while the construction industry grew within recent years with the support of the government, followed by a boom in the private sector, this was not observed in other industries such as high technology, yet both these sectors should grow parallel to each other.

Pointing out that the international credit rating agencies' negative reviews were also unfair as shown by the recent economic figures, Erdoğan said the main aim of such systematic attacks was to discredit Turkey. "Yet, such attempts failed as the Turkish citizens are aware of such games played on Turkey. The nation gave its answer during the presidential elections," added Erdoğan. Erdoğan added that despite the negative media attention and news about Turkey, Turkey's exports are at a record level, as proved by the growth figures announced on Thursday. "While we hope to improve these figures, the global crisis still has a great effect on the Turkish economy. The reserves of the Central Bank of Turkey are around $133 billion, and those who claimed that the high current account deficit observed in Turkey over the last 12 years would cause an economic crisis in Turkey, are now ashamed of their previous assumptions," said Erdoğan. He further noted that the mega projects initiated and other successes such as the record level observed in tourism this year, will continue to support the economy. "We will work hard, we will create employment and continue to be an ever-growing, strong country," concluded the Turkish President.