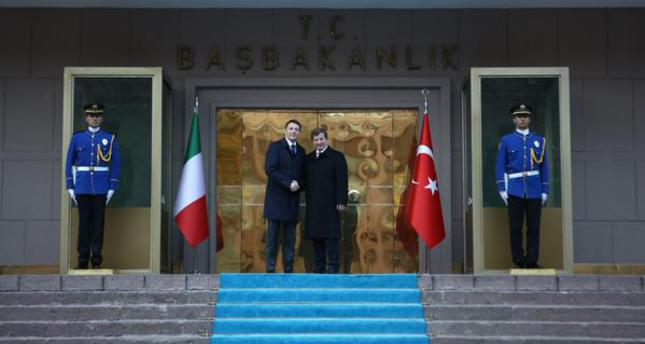 Together with the Italian Prime Minister Matteo Renzi, Prime Minister Ahmet Davutoğlu attended the Turkish-Italian Business Forum held at the Wyndham Grand Levent Hotel in Istanbul on Friday. Speaking at the opening ceremony of the Forum, Davutoğlu said that the cooperation between Turkey and Italy will have a very important effect on Eurasian and Mediterranean trade, and that Turkey and Italy are countries that will become more crucial in the global economy in the near future.

Turkey and Italy have also joined forces in trade to bolster the established political relations between the two countries. Davutoğlu noted that while Italy is one of the most crucial centers of Mediterranean culture and trade, Istanbul is the last stop on the Silk Road that crossed the whole of Eurasia.

Davutoğlu said that relations between the two countries offers the chance to create an extensive cooperation area in terms of economics and investment, as Italy is Turkey's fourth biggest foreign trade partner. Moreover, Italy is Turkey's fifth biggest import partner and fourth biggest export partner, and Italian companies have invested more than $4.5 billion into Turkey. The prime minister also emphasized that the government is willing to take steps to increase cooperation, including the volume of foreign trade with Italy - which is currently around $19.5 billion - within Turkey's overall foreign trade volume, which has exceeded $95 billion within the last five years.

On the significance of the forum, Davutoğlu defined the meeting as a brainstorming session where common perspectives and targets were discussed, and said that, together, the politicians guarantee political stability and political vision. The prime minister also affirmed that they are determined to remove the bureaucratic barriers and limitations that stand in the way of trade.

Davutoğlu emphasized that the latest steps taken regarding the ATAK helicopter project and the Türksat satellite have been achieved jointly with Italy and further cooperation will be established between the two country's defense industries in the future. Turkish and Italian companies can initiate common projects in third countries, and according to Davutoğlu, Africa is one of the areas that has the highest potential for joint investments by Turkish and Italian companies.

Davutoğlu also discussed the possibility of establishing a Turkish-Italian University in Turkey with Renzi. "There have been Turkish-German universities in the past and now we are establishing a Turkish-Japanese university. We would like to establish a Turkish-Italian University that will become at least as significant as Galatasaray University, which is crucial for the relations between Turkey and France," Davutoğlu said, and underscored that the governments are willing to support such projects once Turkish and Italian businessmen take the initiative, Moreover, such a university would unite these two great civilizations and would enable Italians to learn Turkish more easily and Turks to learn Italian.

Renzi also noted that, as globalization creates many advantages and stimulates potential, the Italian government is willing to lend any kind of support to Turkish companies who seek to form international business relations with Italian companies, as the partnership regarding the construction of the third Bosporus bridge demonstrates.

Renzi underscored that both countries should be proud of their past, to be open to change, take note of anything that is going wrong and then embrace their future. "The doors of both countries are open to each other as we share the same problems, such as those in Syria and Iraq as well as those in the Mediterranean and the Balkan regions. These are all our priorities and we have a strategic union with Turkey in these areas. However, what we require the most here is courage since the future does not belong to cowards, but to those that are willing to adapt to change," Renzi said.

The Chairman of the Foreign Economic Relations Board (DEİK), Ömer Cihad Vardan, also noted that Italy is one of the countries that Turkey can engage in the most business with and is a country with strong and established business ties. Confindustria Executive Board Member Licia Mattioli further emphasized the important investments of Italian companies and SMEs in Turkey, and that as Confindustria, they believe in the importance of Turkey in the EU as well as have been pressurizing the Italian government in this respect. Mattioli said that they are striving to ensure that the Transatlantic Trade and Investment Partnership, to be established between the EU and the U.S., should be beneficial for all sides and that they believe economic cooperation should also improve. "Turkey is a great market for our products as both countries have the same tastes," Mattioli added.