World Markets Hang on to the upcoming Fed statement 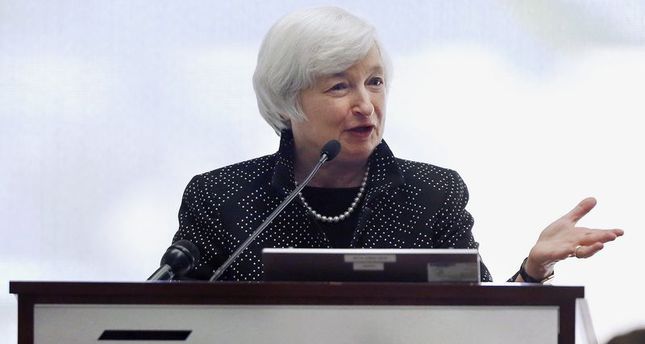 by Associated Press Dec 17, 2014 12:00 am
In a statement the Federal Reserve is expected to issue that it may no longer plan to keep a key interest rate near zero for a "considerable time." Dropping that language would be viewed as a signal that the Fed is moving closer to a hike.

Yet even if it drops the "considerable time" phrase, few envision an imminent rate hike. Most economists think the Fed will wait at least until June to raise short-term rates. It would be the first rate increase since June 2006. The Fed last cut rates on December 2008 when the central bank reduced its key short-term rate to a record low near zero in an effort to battle the worst economic downturn since the 1930s.

In addition to issuing its usual policy statement to close out its final meeting of the year, the Fed will update its economic forecast and Fed Chair Janet Yellen will hold a news conference. The meeting with reporters will give Yellen the chance to explain the Fed's policies in greater detail.

While many believe there will be a slight change in the Fed's guidance about the future course of interest rates, analysts say as long as inflation remain muted, the Fed may be content to leave rates at rock-bottom levels for as long as another year.

Low rates can encourage borrowing and spending, as well as fuel growth. But if left too low for too long, they can accelerate inflation.

"I think the odds are that the Fed will drop the 'considerable time' wording, but I think some people are making more out of that change than they should," said Diane Swonk, chief economist at Mesirow Financial.

Even if that wording is removed, economists expect the Fed will stress that the timing of a rate hike will be driven by the economy's performance, not by any preset timetable.

If the job market and the economy keep improving, a rate increase could come sooner. Yet if the economy slows unexpectedly or if sinking oil prices keep inflation persistently below the Fed's 2 percent target, the first rate hike might be delayed.

The debate inside the Fed is pivoting on which of those forces an improved economy or excessively low inflation should outweigh the other. Complicating the Fed's decision is that other major central banks in Europe, Japan and China, for example are moving in the reverse direction to keep rates down to support slowing economies. When central banks move in opposite directions, they risk causing disruptions in the global flow of capital.

The minutes of the Fed's last two meetings showed that officials discussed changing the "considerable time" language. But some worried that doing so might be misread to mean the first rate increase would come soon. In the end, the phrasing was retained.

To soften the market impact, some analysts say "considerable time" may be replaced by language that says the Fed will be "patient" in deciding when to raise rates. In recent weeks, several Fed officials have used that word to describe how the central bank will proceed.

The word "patient" has history behind it. The last time the Fed moved from a prolonged period of low rates in 2004, it shifted from saying it would keep rates low for a "considerable period" to pledging to be "patient" in raising them. Five months after dropping "considerable period" in January 2004, the Fed approved a rate hike.

Vincent Reinhart, who was the Fed's top staff economist then, said it would be a wrong to assume that the lag time between a change in the statement's language and a rate increase would necessarily be the same this time.

The consensus view that the Fed will begin raising rates in June 2015 has held steady for months despite slight ups and downs in the economy's performance.

Recently, the data has been almost all positive with 321,000 jobs created in November, the most in nearly three years.

Mark Zandi, chief economist at Moody's Analytics, foresees economic growth of 3.3 percent next year which would be the best showing since 2005 up from 2.2 percent expected this year.

Brian Bethune, an economics professor at Tufts University, noted that while job gains have been solid, wage growth remains weak and inflation is slowing, reflecting the plunge in gas prices and a stronger dollar.

"With inflation falling, it just doesn't make any sense to argue that the Fed should accelerate the timing of its first rate hike," Bethune said.