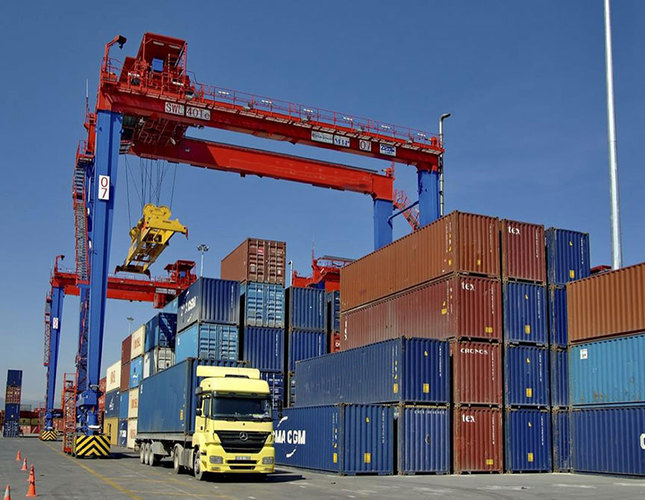 Turkey's exports increased from $36.1 billion in 2002 to nearly $158 billion in 2014, a success largely associated with relative political and financial stability achieved in the country.

Mehmet Büyükekşi, president of the Turkish Exporters' Assembly, said that 2015's circumstances can be more challenging, as the U.S. Federal Reserve is expected to hike interest rates.

Higher U.S. interest rates could spur an outflow of capital from emerging markets, including Turkey, where private sector's foreign debt is now at $165.2 billion.

The Federal Reserve had said it would keep interest rates near zero "for a considerable time," but signaled on December 17, 2014 that it would raise rates sometime next year.

"Cautiously but optimistically, we need to use opportunities in exports and we have to create new opportunities," Büyükekşi added.

The driving force of exports was the automotive sector, as car exports rose 4.5 percent on an annual basis to $22.27 billion. The textile sector's annual exports were up 8 percent, accounting for $18.7 billion. The chemicals sector came in third after its exports grew by only 2.3 percent to $17.8 billion.

The jewelry sector increased its exports by 38 percent and the Turkish defense and aviation sectors' exports also grew by 18.7 percent.

Figures show that neighboring Iraq remained Turkey's second largest export destination, following Germany, despite exports to Iraq dropping by 10.1 percent to $10.6 billion in 2014. Exports to Germany increased by 11.3 percent to $14.8 billion and exports to the UK were up 12.6, standing at $9.6 billion.

Exports to EU countries increased by 9.2 percent to $67.6 billion.

Exports to the Middle East were also up by 6.2 percent to $29.5 billion, with a 61 percent increase in exports to Syria.

Exports to markets with which trade was minimal in the past also showed stronger figures, as sales to Rwanda surged 295 percent and exports to Suriname increased by 158 percent.

The Turkish government's exports target is $500 billion by 2023.

Turkey's first-quarter GDP growth was 4.8 percent, but it slowed in the second quarter to 2.2 percent and dropped to 1.7 percent in the third quarter after the ISIS-provoked geopolitical crisis in Iraq and Syria affected Turkish economy.

Turkey's unemployment rate rose to 10.5 percent in September, from 10.1 percent during the previous month, according to the Turkish Statistical Institute.

On December 16, 2014, the Turkish lira dropped in value against the dollar hitting a historic low of 2.4126 lira per dollar.