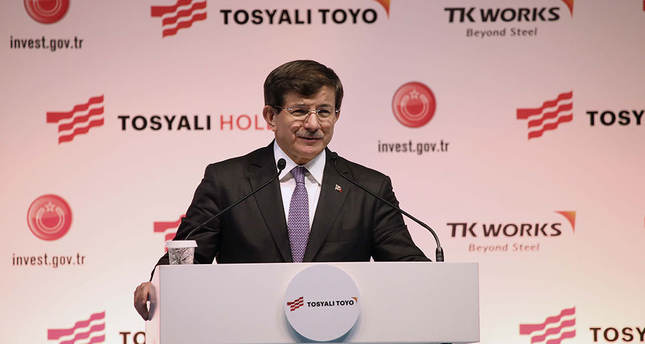 by Halil İbrahim İzgi Jan 04, 2015 12:00 am
Tosyalı Holding, one of Turkey's largest steel manufacturers, has laid the foundations of a new factory in cooperation with Japanese steel giant Toyo Kohan in the southeastern city of Osmaniye. Prime Minister Ahmet Davutoğlu attended the groundbreaking ceremony accompanied by Turkish and Japanese officials.

Davutoğlu emphasized that 2015 is the 125th anniversary of the Ertuğrul Frigate's voyage to Japan, which marked the beginning of Turkish-Japanese relations. Davutoğlu also said that he was happy that economic relations with Japan focused on high value added products.

The Tosyalı-Toyo Steel Plant, which was initiated by a joint Turkish-Japanese venture, will be the first facility to produce steel with advanced technology in Turkey and the plant will export steel to Europe, Asia and Africa. The investment, which was realized with the support of the Prime Ministry Investment Support and Promotion Agency, will enable the production of $500 million worth of steel in Turkey, which is currently supplied from outside the country. This is the first investment of Toyo Kohan in the Middle East as well.

Tosyalı also said that they initiated negotiations with Toyo Kohan in 2012, adding, "In a period when Turkey's inclination toward value-added products is persistently emphasized, we focus on initiatives that will make a breakthrough in our country. Our collaboration called Tosyalı-Toyo Steel Co. has set out to produce Turkey's first high-tech and high value-added flat steel. The facility, which will be established with an initial investment of $500 million, will be completed in 20 months. Moreover, 51 percent of the plant will be owned by Tosyalı Holding, while the remaining 49 percent will be owned by Japanese steel giant Toyo Kohan."

Tosyalı noted that they produce 5,000 meters of pipes per minute and have set their production targets for 2017 and 2020 at six million and 10 million tons, respectively. Tosyalı Holding is one of the main suppliers of the Trans Anatolian Natural Gas Pipeline (TANAP), which is one of the most important energy projects of Turkey and the region.

Speaking at the groundbreaking ceremony, Toyo Kohan CEO Sumida Hirohiko said that the annual production amount of the plant in Osmaniye will be the same as that of the facility in Japan, adding, "This facility will be the second most important one of Toyo Kohan after the plant in Kudamastu. With this investment, we aim to expand into new markets via Turkey."

Touching briefly on the history of Toyo Kohan, which was established in 1934 as the first tin can manufacturer of Japan, Hirohiko said, "Today, we are one of the [steel manufacturing] companies with the highest production technologies in the world. The fact that Toyo Kohan's global knowledge and experience come together with Tosyalı Holding's leading position in the region and large production capacity signifies a significant collaboration."

Tosyalı Holding was founded in 1952 to produce stove pipes. The company, which became a global steel producer, is certified by the American Petroleum Institute and also manufactures pipes used in shale gas drilling operations in the U.S. The company conducted over $550 million worth of exports in 2014 and plans to reach an export volume of $805 million in 2015. It aims to increase this figure to $1.5 billion in 2023, on the 100th anniversary of the Republic of Turkey.
Last Update: Jan 05, 2015 3:03 pm
RELATED TOPICS