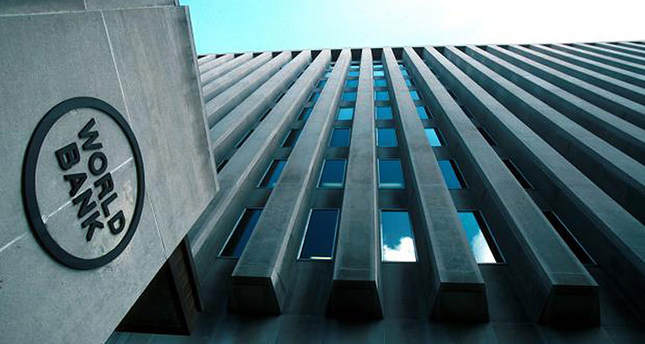 Despite falling oil prices, the World Bank revised its growth forecasts on global economies downward while keeping the Turkish economy’s growth forecast in 2015 at 3.5 percent

The World Bank has decreased its global economic growth estimations from 3.4 percent to 3 percent for 2015 and from 3.5 percent to 3.3 percent for 2016, despite the decline in crude oil prices, in the first and second part of its 2015 Global Economic Outlook Report.

The bank noted the economic outlooks of some European countries, Japan and some developing countries failed to improve. The report estimated a growth rate of 3.5 percent for Turkey in 2015, 3.7 percent in 2016 and 3.9 percent in 2017.

"In Turkey, growth is expected to gradually pick up from 2015 to 2017 on the back of stronger private consumption," read the report. However, it also underlined that the growth rate may be lower than the average growth rate observed until this year. Yet, it also emphasized that the decline in global commodity prices and the increasing demand in the eurozone might support the decrease in Turkey's current account deficit.

The World Bank's report stated that while the growth rate in Turkey in 2014 has geared down, the economic performance of Turkey was better than expected. Moreover, the rate of the current account deficit to gross domestic product was 7.9 percent in 2013, but decreased to 5.6 percent in 2014 because of strong public spending and an increase in exports despite uncertainties surrounding investments and consumption due to inflation levels and geopolitical risks. The decrease in gold imports, strong exports and domestic demand expected to slow were also reasons given for the economic improvement.

The report underscored that since many investors had withdrawn their funds from Russia and invested in Turkey instead, capital flow level continued to be high this year. Furthermore, economies such as Kazakhstan and Turkey, which are faced with the threat of high inflation on capital outflow, might have to apply financial tightening policies in order to achieve their inflation targets and ensure the continuity of capital flow.

World Bank Chairman Jim Yong Kim issued a written statement noting that during these unsettling economic times, developing economies should mobilize their resources to support their social programs and implement structural reforms that will invest in people. "It is also of utmost importance to remove any kind of obstacles in the way of the private sector's investments.