Stronger capital inflow is what Turkey needs for stronger growth 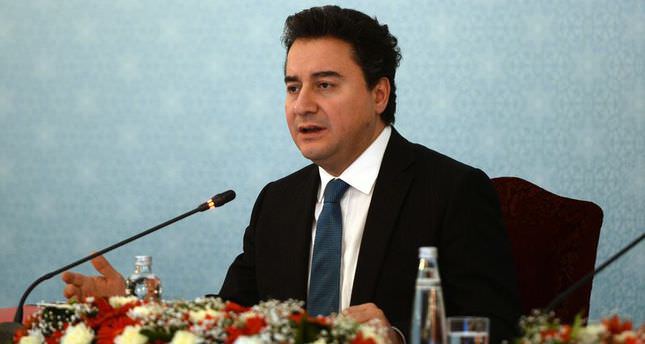 Two new packages are on the table for the government regarding improvement in the investment climate. While expecting larger fund and capital inflows in 2015, the deputy PM also calls on citizens to keep their gold in banks

The government is working on two new packages for industrial investment and support for capital, regarding improvement in the investment climate, Deputy Prime Minister Ali Babacan announced Friday. Packages concerning industrial investments should be completed within a month. Answering the questions of the Anadolu Agency's Editors' Desk, Babacan gave some information on the second package: "The other package is about supporting capital instead of debt on balance sheets.

There will be many elements in it." He said that institutions in the Committee of Financial Stability, the Ministry of Finance and the Ministry of Development were all working together on the new package and that package could be completed within two months. Babacan also said that Turkey expects a large amount of fund inflow and capital inflow in 2015.

The government wants to create a system for private companies seeking to borrow money using equity-based financing. The Turkish private sector has long-term debt of about $162 billion. Babacan explained that the government wants its citizens to keep their gold in banks instead of hiding it under their mattresses. It is believed that over 5,000 tons of gold, currently worth close to $200 billion, are hoarded by Turkish residents as a form of personal savings, and therefore, kept out of the banking system.

Babacan also talked about the Individual Pension System, saying that they are working on a new arrangement on deductions in favor of Turkish citizens. The number of participants in the Individual Pension System has increased to 5.1 million this year, up from about three million at the beginning of 2013, with the encouragement of a state contribution of 25 percent of pension deposits. The total volume of pension funds recently reached TL 37 billion ($16.1 billion), up from TL 20.3 billion ($9.5 billion), Babacan explained.

In addition to stating that 2015 will be far better than 2014 in every aspect unless an exceptional circumstance occurs, Babacan touched upon the expected inflation in 2015, saying that the official inflation forecast is still around 6 percent. "We will continue to watch oil prices, but if they continue at this level, we can see inflation decreasing to even 5 percent." Talking about legislation concerning construction, Babacan noted that the draft would be discussed in detail next week, and they were open to all opinion about the draft.

The deputy prime minister pointed out that Turkey's growth rate for 2014 is fine at 3 percent, saying, "In 2015, Turkey will be one of fastest growing economies in the EU."

Every $10 drop in oil price decreases the current account deficit by $4.4 billion, according to Babacan, and the effect of currently declining oil prices will be felt in Turkey by June. Turkey's energy bill is expected to drop by half in 2015 if oil prices remain around the $50 per barrel mark, according to economists.

The total amount of the current account deficit in the January to November period narrowed to $38.7 billion, indicating a decrease of $18 billion compared with the same period in the previous year, the Central Bank of Turkey indicated on Jan. 13. Thanks to this decline in the price of oil, Turkey will also be able to reduce inflation to around 6 percent, perhaps even to the 5 percent level and to boost its growth rate to 4 percent in 2015, Babacan said.

Babacan also commented on the recent Paris attacks, saying, terror has no religion, nationality or race. "There is no concept of 'my terrorist - your terrorist.' We are against all terror and condemn all forms of terrorism," he said.

Babacan, born in 1967, has been serving as the deputy prime minister for economic and financial affairs since May 2009. He is also a member of the National Security Council.