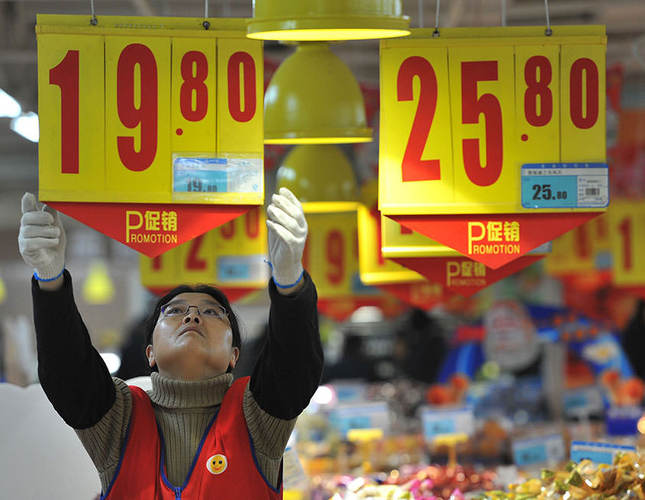 by Jan 18, 2015 12:00 am
China's annual GDP growth slowed to its weakest rate in more than two decades in 2014, according to an AFP survey, projecting further deceleration in the world's second-largest economy this year.

The median forecast in a poll of 15 economists saw the Asian giant's gross domestic product (GDP) expanding 7.3 percent last year, down from 7.7 percent in 2013. That would be the worst full-year result since the 3.8 percent recorded in 1990 - the year after the Tiananmen Square crackdown. The National Bureau of Statistics (NBS) releases the official GDP figures for the fourth quarter and the whole of 2014 on Tuesday.

For this year, the economists see growth further slowing to a median 7 percent, as Chinese leaders proclaim a "new normal" of slower expansion and emphasize economic reforms. "China may introduce many restructuring and reform measures this year and this may have some negative impact on economic growth," ANZ economist Liu Li-Gang told AFP. He said that they might include changes to state-owned enterprises, financial reforms such as interest rate liberalization and looser restrictions on private banks. China, a main driver of global growth, was beset last year by problems ranging from weakness in manufacturing and trade to financial worries over rising debt levels and falling real estate prices, which have sent shockwaves through the key property sector. For the period of October to December 2014, the survey saw GDP rise to a median 7.2 percent year-on-year. That would be marginally weaker than the third quarter's 7.3 percent, and the worst quarterly result since the first three months of 2009, when growth logged a 6.6 percent expansion during the global financial crisis. Authorities appeared to take last year's performance largely in stride, sticking to a scenario whereby the country's consumers take the lead in underpinning expansion in the coming years, emphasizing the quality of growth rather than its size in public statements.

"China has entered a new normal of economic growth," Li Baodong, a vice foreign minister, told reporters on Friday, repeating a newly favored phrase of the country's leaders. "That is to say we are going through structural adjustment, [which] is progressing steadily." Purveyors of high-quality consumer goods such as neighbors Japan and South Korea, as well as Europe and the U.S., could stand to benefit from the remodeling of the economy.

But the implications of slowing Chinese growth for the rest of the world are already visible. Commodity exporters such as Australia have suffered, after profiting immensely from China's boom years when expansion averaged 10 percent, hitting 14.2 percent as recently as 2007. There were limits to official nonchalance in Beijing, however, as a series of measures dubbed "mini-stimulus" by economists were put in place from April, while in November the central People's Bank of China cut interest rates for the first time in more than two years to try to put a floor on the slowdown. Economists are broadly expecting further monetary policy tinkering this year, but say the focus will be on structural reforms over the temptation of stimulus. "This would be similar to economic policy making in the late 1990s, which resulted in a decade-long reform dividend," Brian Jackson, Beijing-based economist with IHS Economics, said in a research note. "Put together, that points to weakening growth in 2015," he added.

An official expansion target of "about" 7.5 percent was set for last year. The goal is traditionally pegged at a level that is easily achieved, and is usually approximated to provide wiggle room for positive spin just in case. It has not missed its mark since 1998.