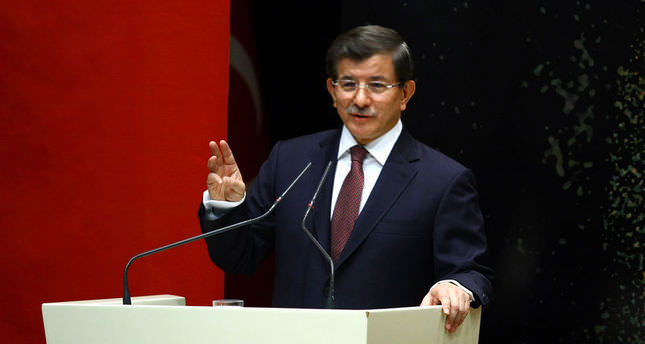 by Daily Sabah Jan 20, 2015 12:00 am
Prime Minister Ahmet Davutoğlu said that Turkey has successfully passed all economic and political tests, proved to be a stable actor in the region and is no longer the 'sick man of Europe.' He spoke at the Merrill Lynch Turkey Investment Conference organized in London and noted that Turkey is becoming a strong economic player in the global arena.

"The sick man of Europe was a term that referred to the Ottoman Empire in the 19th century" Davutoğlu said, highlighting that the term is now used to refer to Europe instead. He emphasized that Turkey has become a regional hub and a global actor, and was successfully able to integrate a stable political vision over the past 10 years. He also added that Turkey's 2023 goals will be effective in moving the country forward.

An agreement between the London Stock Exchange and the Borsa Istanbul was signed in London, which will help to increase the liquidity of some of the capital market instruments as well as give Turkish investment funds the ability to compete in global markets. Davutoğlu said that the collaboration between Turkey's and the U.K's economies might be a solution for the European Union at the Istanbul: Regional Center, Global Actor Forum, organized by Borsa Istanbul and Turkish Exporters Union. Drawing attention to the similarities between London and Istanbul in terms of culture and traditions, Davutoğlu said that in order to comprehend the modern economy, one would have to look at London; in order to comprehend the traditional economy, one would have to look at Istanbul. "These two traditions together form the global economy," Davutoğlu said.

Davutoğlu added that when he was in Brussels last week, it became evident that Europe needs to search for new alternatives such as London and Istanbul. "Now the East and the West need to unite together. The European economy can only become integrated and improve itself if both of these traditions come together," Davutoğlu said.

On the doubts of various economic observers and experts concerning Turkey in 2014, he said that these doubts and anxieties were mostly due to Syria, Ukraine and other regional crises along with the elections in Turkey. "Elections are important for democratic legitimacy, which was restored in 2014 in Turkey," Davutoğlu added.

Touching on the fact that, with the government's correct policies, the budget deficit has been decreasing in Turkey since 2014. Furthermore, 1.3 million employment opportunities were formed in 2013, which was a critical year. Davutoğlu also noted that if Turkey had become a member of the EU before the crisis, new employment opportunities may have mitigated the losses.

According to Davutoğlu, Turkey's success can be attributed to its successful management of the economy as well as political stability. In 2014, the budget deficit significantly decreased, while over 6 million unemployed people started working, making Turkey the third largest economy ranked by the OECD. The prime minister said that political stability and capacity were an inseparable part of economic development. He also added that Turkey's growth rate of around 3 percent is a disappointing fact; however, such a percentage is still higher than some developing countries.

Davutoğlu also said that in terms of cancelling visa requirements, Turkey's efforts are important and the country's resources are not based on oil or natural resources but mostly human resources. "Our citizens should be able to travel freely. If they want to travel to Africa then they should be able to do that," Davutoğlu said, stressing that Turkey has signed visa agreements with more than 65 countries for free access. Moreover, the Turkish government has plans to create regional center in Africa that will be situated between East Asia and Latin America for Africa, Asia and Europe.

The prime minister also highlighted the importance of Istanbul, as it is already a geographical center but is on the verge of also becoming a financial center thanks to the efforts of Borsa Istanbul and the government. Istanbul had witnessed a big leap in the financial center index, rising from the 72nd to the 30th place.

"I believe such collaboration is crucial for the shaping of the global economy, and this merger has various positive consequences not only for the Turkish and British economies but also for Europe and the world. I would like to congratulate the Istanbul and London Stock exchanges, and I would also like to note that you have our government's full support in order to actualize this strategy," Davutoğlu said.