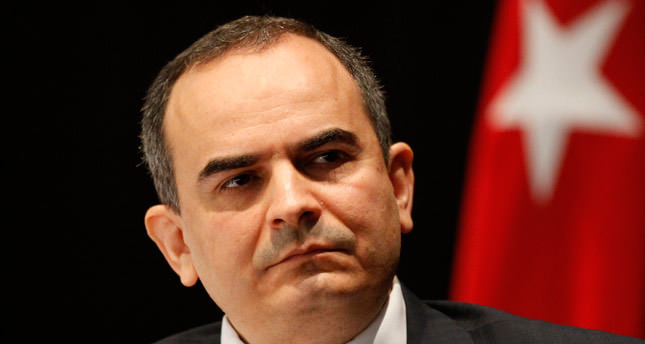 The Committee of the Central Bank announced yesterday that it has decided to cut the one-week repo rate to 7.75 percent from 8.25 percent following a drop in inflation – although other interest rates remained steady. The marginal funding rate remained at 11.25 percent, the interest rate on borrowing facilities provided for primary dealers via repo transactions remained at 10.75 percent and the borrowing rate remained at 7.5 percent. The bank has been criticized by markets, businessmen and the government for keeping rates steady for five months.

A 50 basis point decrease was an expected drop, but it still failed to impress the country's business communities. While decreasing the rate, the CBRT also said that further cuts will depend on future inflation-rate declines.

Erdoğan called on the bank to decrease the rates by pointing to declining oil prices, which contributes to the reduction of the current account deficit - one of the country's main economic obstacles. The CBRT insisted on following markets until a clear sign regarding inflation was apparent. The consumer price index in December had declined by 0.44 percent compared to the previous month, which was below expectations. In the beginning of January, Deputy Prime Minister Ali Babacan announced the government wants inflation to fall to 6 percent by March and Economy Minister Nihat Zeybekci said that the CBRT should revise interest rates by taking inflation expectations in consideration.

Speaking to Daily Sabah, economist and Nişantaşı University President Kerem Alkin said that the CBRT, as being a monetary school of thought, has always had its own perspective on monetary policies. "We have to emphasize that this perspective is a bit conservative and doesn't like to be proactive. The bank always makes decisions regarding its own analysis, despite the criticisms by political authorities and markets," Alkin stressed, adding that the 50 basis point decrease was typical of the cautious attitude held by the CBRT. He also said that the pricing of the U.S. dollar to Turkish lira exchange was projecting a 75-100 basis point decrease. "On the other hand, markets signs indicate that this decline will reach at least 1 point at the meeting of the bank on March 17. However, political circles are expecting a 2-point fall. So, if the CBRT will not decrease the rates that much, they should announce a more detailed explanation for better perception management," Alkin emphasized.

"The main purpose of the CBRT's existence is to provide price stability and to avoid pressures on inflation by exchange rates; so, the bank's decision is quite understandable," said economist Hikmet Baydar, the founder of 3 Göz Consultancy. Furthermore, reinforcing that it is the government's duty to provide confidence and increase foreign direct investments, Baydar said, "Declining interest rates should be a result of a secure business environment." The Chairman of the Istanbul Chamber of Commerce, İbrahim Çağlar, also released a written statement that stressed the decision of the CBRT was a positive sign to follow; however, it was not satisfying.