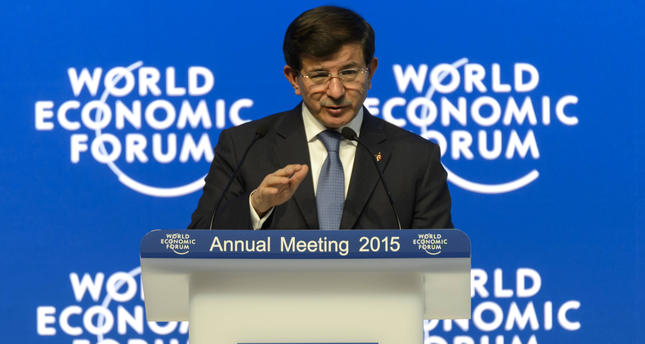 by Daily Sabah Jan 22, 2015 12:00 am
Prime Minister Ahmet Davutoğlu has stated that Turkey has the necessary stability regarding its geographical location to make it a base for investments and it has become a leading investment hub in the region. He made the comments while speaking at the "Why Invest in Turkey? Why Invest in Borsa Istanbul?" event organized at the World Economic Forum in Davos on Thursday.

"Our programs will not only result in quantitative development, but will also produce qualitative results" he said.

"Turkey is a dynamic market, with a major labor force, which makes it suitable for every kind of investment" Davutoğlu said, while he noted that having an investment base in Turkey allows investors to reach sixty countries within a span of only four hours.

Davutoğlu stated that Turkey is open to all types of investment and noted that the government will provide support for foreign investors. "In the case that foreign investors face obstacles, they should inform us so we can assist them and remove the obstacles" the Prime Minister said.