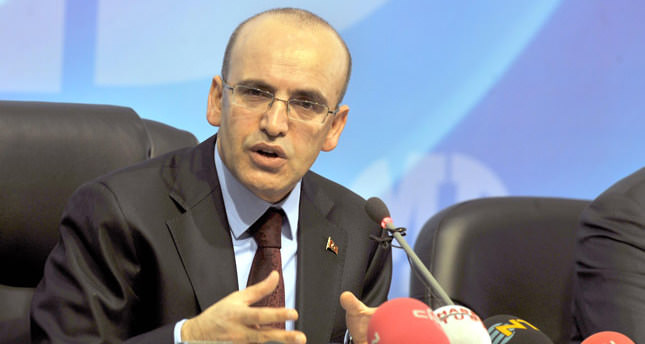 by Daily Sabah Jan 24, 2015 12:00 am
The European Central Bank's (ECB) quantitative easing program, which will pump 60 billion euros into the economy each month, and the decline in the price of oil are the best things that could happen for Turkey, said Finance Minister Mehmet Şimşek. According to a story from CNBC, "It's great news for Turkey. We're delighted," Şimşek said on Friday responding to the bond-buying program in order to stimulate growth in the deflation-hit euro zone. "If Europe pulls out of this stagnation on the back of this monetary expansion, that's great news for Turkey because that will help Turkey grow faster," he added.

Turkey, once called the "new tiger" of emerging markets, has seen capital outflows, currency declines and growth suffer on the back of a global slowdown. Speaking to CNBC from the sidelines of the World Economic Forum in Davos, Switzerland, Turkey's finance minister said that the eurozone slowdown had had an acute impact on Turkey. "Europe has been a big drag on the Turkish economy because Europe is our largest trading partner in terms of exports but also in terms of supply of FDI [foreign direct investment] and tourism arrivals."

Turkey has experienced rapid growth over the last 10 years, earning it the nickname the "new tiger" of emerging markets. Turkey's gross domestic product (GDP) grew a massive 9.2 percent in 2010 but by 2012, alongside a global slowdown, the economy expanded "just" 2.1 percent, according to World Bank data. By December 2014, the World Bank forecasted that economic growth was likely to be 3 percent. In 2015, the economy is expected to grow by 3.5 percent.

Earlier this week, the Turkish central bank cut its benchmark interest rate for the first time in six months to 7.75 percent, following criticisms for lower borrowing costs and a perception that inflation is falling.

The lower price of oil, which has fallen around 60 percent since June 2014, will also act as a fillip for Turkey, Şimsek said. "High commodity prices have been a big headwind for Turkey and now it's turning into a tailwind so clearly it will help because every $10 decline in oil prices improves Turkey's current account deficit by close to $4.5 billion or 0.5 percent of GDP - that's huge - plus it helps reduce headline inflation and gives people more disposable income," said the Minister and added "All in all, it's good news. Having said that, we also realize that in our neighborhood, all those oil-exporting countries will suffer so our exports to our immediate neighbors could suffer to some extent."