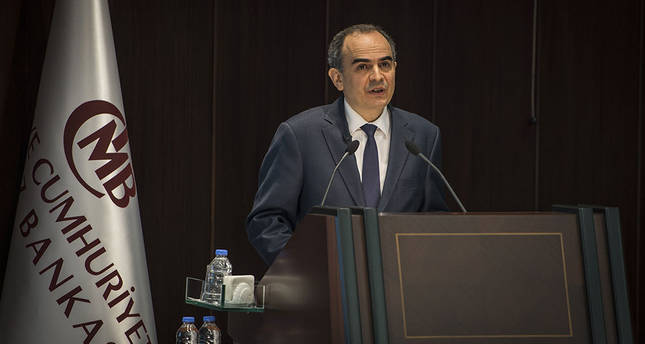 by Daily Sabah Jan 27, 2015 12:00 am
Turkey's Central Bank (CBRT) Governor Erdem Başçı announced the first inflation report of 2015 yesterday. He said that the lowest inflation in 45 years may be achieved in 2015, as inflation forecasts were decreased from 6.1 percent to 5.5 percent due to falling oil prices.

"We have started receiving positive results from our tight monetary policies, which we applied for one year. The downtrend in inflation will accelerate starting this month. It is possible that we will see the lowest rate in 45 years," Başçı said.

Başçı announced that they expect that inflation rates will stay roughly between 4.1 percent and 6.9 percent at the 5.5 percent level by the end of 2015. He explained that the revision from 6.1 percent was a result of decreasing oil prices. The inflation rate for food prices will remain at 9 percent, however.

"We are estimating that inflation will decrease at a remarkable rate as a result of falling oil prices, the reduction of the cumulative currency effect in 2015 and the contribution of food prices," Başçı said, and added that it will come closer to an inflation goal of 5 percent. Highlighting the continuous downward trend in core inflation, he said that with the gradual increase in domestic demand, there will be a moderate rise in the growth rate as well.

Başçı emphasized that they expect an apparent decrease in inflation rates in the first quarter of 2015. Moreover, there is a 70 percent probability that the inflation rates for 2016 will stand roughly between 3.2 percent and 6.8 percent at the 5 percent level.

The CBRT governor stressed the effect of low inflation rates to achieving further decreases in interest rates. Furthermore, if January inflation rates decrease by more than 1 percent, which will be announced on Feb. 3, they may evaluate the situation earlier – on Feb. 4 rather than previously announced Feb. 24.

Markets follow the CBRT's inflation report closely, especially since the bank insisted to wait to cut interest rates by pointing to high inflation as the reason. After maintaining the interest rates for a fifth month in a row, the bank has been criticized by markets, businessmen, government and even by President Recep Tayyip Erdoğan. A 50-basis point decrease, which was announced last week, was an expected drop, but it still failed to impress the country's business communities. While decreasing the rate, the CBRT also said that further cuts will depend on future inflation-rate declines.

During the press conference yesterday, Başçı said that they expect inflation to fall, but they prefer to get the results first before making any further moves.

Inflation kept its upward trend in 2014 until December. Turkey finally benefited from the falling oil prices as an energy-dependent country in December, when a decrease of 0.44 percent inflation was announced. The main reasons behind this upward trend were rising food prices and geopolitical issues. Food prices were also significantly affected by bad weather, while the world average dropped 25 percent. Geopolitical problems have also caused exports to decrease.