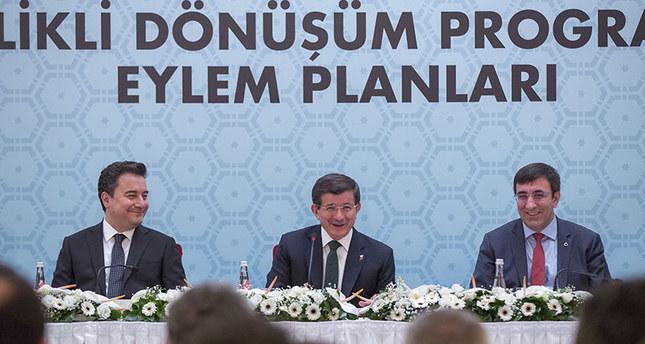 by Nurbanu Kızıl Jan 28, 2015 12:00 am
Turkey's third Package of Preferential Transformation Programs aims to increase activity in the domestic labor market, increase the employment of women and reduce unemployment in the country, according to Prime Minister Ahmet Davutoğlu. He announced the details of the package yesterday at a press conference in Ankara, and said that the program will form the "backbone of economic development."

Davutoğlu said that a two-way mechanism would be established for the reform programs and that the government would promote the reforms in local administrational centers as well as the international arena. The package, consisting of 380 action plans and eight programs, addresses a number of serious issues including the economy and employment as well as the health and education sectors.

One of the most important features aims to increase the rate of women in the labor force by 1 percent each year. This will be possible by encouraging more women to join the labor market through flexible working hours, encouraging and increasing entrepreneurship among women and establishing a monitoring system to observe the active labor force in 81 provinces.

The package will also address the gap between education and the lack of applied training programs to maximize the skills of students who will be prepared to join the labor market.

"Applied training will be developed to strengthen relations between the workforce and education," said Davutoğlu, who explained that vocational education will be shaped in accordance with the needs of the domestic labor market. He added that counseling services, which will aim to improve and foster individual skills, will be developed, while at least one subject from the arts and physical education will become a prerequisite for education to ensure students receive an academic education and also train their minds and bodies to become successful and healthy individuals.

Urban development and housing is another important feature of the package. The government has pledged to subsidize mortgage payments by 15 percent in cases where an individual opens a savings account and saves money for five years to buy a house for the first time. It was noted that the aim of this initiative was to increase the demand for buying a house and to support families with a low-income when making a down payment to buy a house. Moreover, a real estate certificate model will be established to ensure that the decreasing value of real estate during development or expropriation will be secured and disciplined.

Davutoğlu also addressed an important issue concerning brain drain in Turkey. "We must make Turkey a center of attraction for highly qualified Turkish citizens who went abroad to study and did not return," he said, emphasizing the government will implement a series of regulations to attract qualified citizens from abroad.

Another important feature of the package is its aim to transform the unhealthy lifestyle habits of the nation and embrace a healthier and more active lifestyle. The government will develop programs to combat the use of cigarettes, alcohol and drugs, while promoting a "culture of healthy eating habits." The agricultural and food sectors will be subjected to more inspections to ensure quality, while tags and labels will be renamed to prevent the misleading of consumers.

The government has previously introduced structural reform packages focusing on sustainable growth, increasing savings and efficiency, restraining the unrecorded economy and improving the working conditions of employees with a special emphasis on women in the labor force, as well as many others.