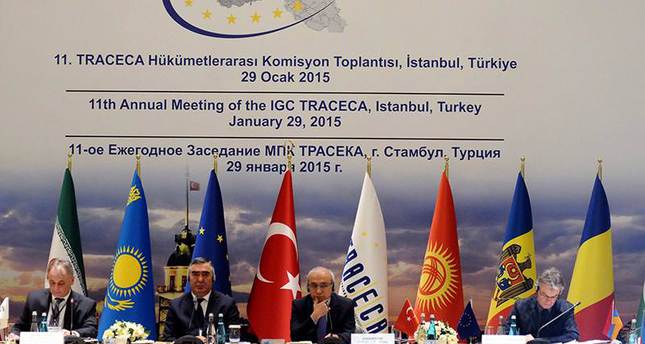 by Daily Sabah with AA Jan 29, 2015 12:00 am
Starting Thursday, Turkey took over the presidency of Transport Corridor Europe-Caucasus-Asia (TRACECA) for one year. The 11th Annual Meeting of the TRACECA Intergovernmental Commission was held in Istanbul yesterday and attended by ministers of member countries, national general secretaries, Lithuania as an observer, EU officials, TRACECA project leaders and representatives of international organizations.

Transport, Maritime and Communication Minister Lütfi Elvan announced that the target was to invest around $6 billion to $7 billion in highways and around $4 billion in railways. Elvan further said that there are many technical infrastructure projects currently being conducted within the TRACECA, however, more focus should be given to improving transit corridor infrastructure, facilitating transportation and developing railway investments in the region.

Elvan also underscored that, if the world's gross domestic product is examined over the past 20 years, it is evident that there is an increase in the east more than the west, as economic centers are now gathering more in the East. "This makes it a necessity for Europe to improve relations with the Middle East and East Asia, which are on the route of TRACECA. Therefore, members should focus on joint projects and investments in the transportation industry," Elvan said. Highlighting the Kars-Tbilisi-Baku railway project initiated between Turkey, Georgia and Azerbaijan, Elvan underscored the importance of cooperation between TRACECA's members.

Stressing that Turkey has been striving to expose the transportation potential between Europe and Asia, Elvan said that with the commissioning of the Marmaray and the completion of the Kars-Tphilisi-Baku railway, there will be an uninterrupted rail link from London to Beijing.

"We want to initiate a tender of high-speed rail that will link Istanbul to Turkey's Bulgarian border at Edirne and Kapıkule. We will also increase transportation investments and projects, especially around routes that link the west to the east," Elvan added.

TRACECA is an international transport program involving the European Union and 14 member states of the Eastern European, Caucasian and Central Asian regions. It has a permanent Secretariat, originally financed by the European Commission, in Baku, Azerbaijan, and a regional office in Odessa, Ukraine. The organisation has been entirely financed by member countries since 2009.