Economic powers warn Greece not to renege on reforms 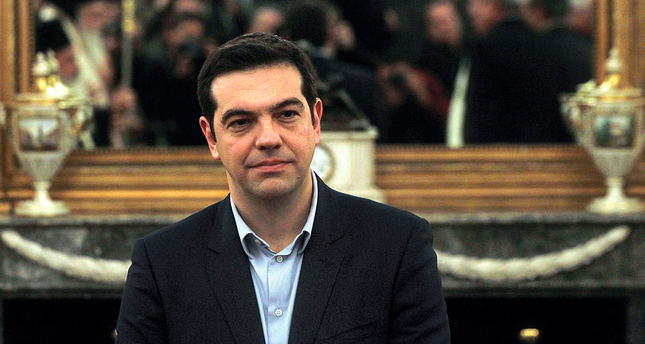 The very first decisions of Greece’s newly elected Prime Minister Tsipras about debts, spending and privatization create concerns over stock markets and have been harshly criticized by economic powerhouses like Germany and China

Economic powerhouses Germany and China warned Greece yesterday against reneging on reforms tied to its massive international bailout, with markets still jittery over fears Athens could default on its debt. Germany, which has shouldered most of the multi-billion euro EU rescue plan for Greece, said the country's new anti-austerity government could not make changes "to the detriment" of other European citizens.

China, which has a major investment in the main Greek port of Piraeus, said it was "highly concerned" after the government of 40-year-old Prime Minister Alexis Tsipras abandoned plans to privatize the harbor, one of Europe's busiest.

On its first day of business on Wednesday, Tsipras's "national salvation" administration rolled back several austerity reforms, including the privatization of the ports of Piraeus and Thessaloniki, the main electricity provider PPC and petroleum refiner HELPE.

Tsipras, leader of Syriza that swept to victory in Sunday's election, also underscored his determination to achieve sweeping cut in debts stemming from Greece's 240 billion euro bailout program. The announcements sent Greek stocks diving by more than 9 percent on Wednesday, with major banks losing more than a quarter of their value on a turbulent day. However, the Athens market was up 3.2 percent on Thursday, with banks jumping 12.59 percent after reassuring comments from a European Central Bank (ECB) official. But London and Frankfurt were both down following declines in Asia over a strengthening dollar and falling oil prices.

European Parliament head Martin Schulz held talks with Tsipras yesterday, the first leading European official to get a closer view of a government determined to reverse many of the unpopular austerity measures that underpin the bailout. Jeroen Dijsselbloem, president of the Eurogroup club of eurozone finance ministers, will follow him today.

"All citizens of Europe must expect that changes in Greek policy will not be made to their detriment," German Vice Chancellor and Economy Minister Sigmar Gabriel told parliament. "Greece must comply with Europe," Jean-Claude Juncker said in an interview with French newspaper Le Figaro. "There is no question of cancelling the debt. We respect the popular vote in Greece, but Greece must also respect others, public opinion and parliamentarians from the rest of Europe," Juncker said.

Chinese media, angered by Tsipras's decision on the port privatization, compared him to the Greek mythological figure of Phaethon, who was given the reins of the sun only to lose control and nearly destroy the earth.

Yields on Greek 10-year bonds rose above the symbolic 10 percent barrier on Wednesday, and ratings agency Standard and Poor's put the country's B credit rating on watch for a possible downgrade.

Tsipras, whose Syriza party ousted the conservatives of former prime minister Antonis Samaras, said at his first cabinet meeting that Greece was no longer willing to bow to the "politics of submission," in a clear swipe at its creditors: The EU and the International Monetary Fund. "Our people are suffering and demand respect ... we must bleed to defend their dignity," Tsipras told his ministers, largely a collection of academics and unionists who have never served in government. He said he wanted a "fair [and] mutually beneficial solution" to the bailout.

The new finance minister, maverick economist Yanis Varoufakis, insisted there would be no "showdown" with the EU, but also called the austerity cuts a "toxic mistake" that ultimately benefited no one in Europe. He said the Syriza-led government wanted "a pan-European New Deal" to encourage growth and help the continent deal with Greece's crisis. Syriza has made frequent references to a "New Deal," harking back to the stimulus program that pulled the United States out of the Great Depression in the 1930s.

In another measure, newly appointed Labor Minister Panos Skourletis said the minimum monthly wage be would be restored to 751 euros - it had been cut to 589 euros in one of the key reforms demanded in exchange for the bailout.

After Greek banks took a hammering Wednesday, shares in Piraeus Bank lost almost 30 percent, and Deputy Prime Minister Giannis Dragasakis said any decision on the sector would be taken in consultation with private shareholders.

Daniele Nouy, head of the ECB Supervisory Board, said despite the post-election turbulence, Greek lenders were capable of surviving. "The Greek banks are facing a difficult situation right now because of the recent elections, but they are pretty strong," she told Bloomberg Television. "A lot of good work has been done to strengthen their balance sheets during the last years." In the immediate future, the new coalition must address a pressing end-of-February deadline set by the EU for Greece to implement more reforms in return for a 7 billion euro tranche of financial aid.