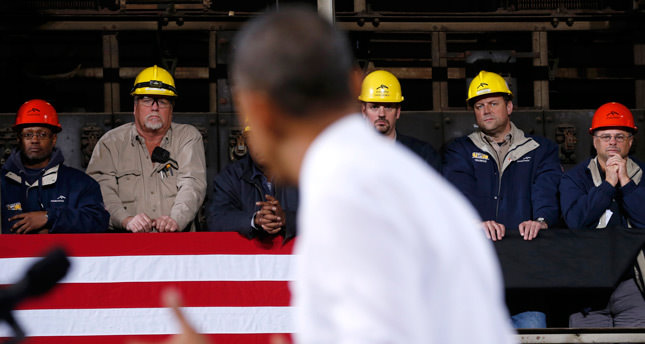 by Associated Press Jan 31, 2015 12:00 am
The U.S. economy slowed in the final three months of 2014 as a big burst in consumer spending was offset by weakness in other areas. The Commerce Department said Friday the overall economy grew at a 2.6 percent rate in the October-December period, down from sizzling gains of 4.6 percent in the second quarter and 5 percent in the third quarter.

Consumers did their part in the fourth quarter, pushing up spending by fastest rate in nearly nine years. But businesses investment, trade and government spending weakened. For the year, the economy grew at a moderate rate of 2.4 percent. But economists believe 2015 could be a breakout year for growth, with consumer spending boosted by strong employment gains and falling gas prices. Many expect growth above 3 percent this year. That would be a significant acceleration after a prolonged period of sub-par activity. Over the past five years since the recession ended in 2009, economic growth has averaged just 2.2 percent, far below the kinds of gains normally seen after a deep recession. The growth in 2014, as measured by the gross domestic product, came after a 2.2 percent gain in 2013. Last year's overall gain was held back by a steep drop in activity in the first three months when severe winter storms sent the economy into reverse with GDP dropping at a 2.1 percent rate in the first quarter. But after that setback, growth averaged 4.1 percent over the next three quarters.

In the October-December period, consumer spending, which accounts for 70 percent of economic activity, grew at 4.3 percent rate, up from 3.2 percent growth in the third quarter. It was the strongest gain for consumer spending since the first three months of 2006.

But business investment on equipment shrank at a 1.9 percent annual rate after big gains in the previous two quarters. Economists said part of that weakness likely reflected cutbacks in oil and gas drilling by energy companies trying to cope with the big drop in energy prices. Government spending fell at a 2.2 percent annual rate in the fourth quarter after a 4.4 percent gain in the third quarter. The third quarter had been supported by a big rise in defense spending which was reversed in the fourth quarter.

Trade, which had contributed 0.8 percentage point to growth in the third quarter, reduced growth by a full percentage point in the fourth quarter. Business stockpiling added to GDP by 0.8 percentage point in the fourth quarter. The Federal Reserve on Wednesday took note of the better economic conditions while promising to remain "patient" in deciding when it is time to begin raising interest rates. A key Fed rate has been at a record low near zero for six years. The central bank has leeway to be patient because the weaker global economy has helped push up the value of the dollar against other countries and gasoline prices are plunging. Both developments are helping to hold down inflation, which was already low.