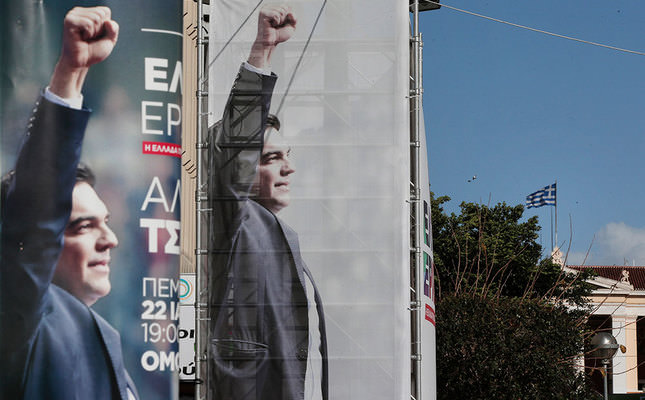 by French Press Agency - AFP
Feb 02, 2015 12:00 am
The decision by Greece's anti-austerity government in Athens to refuse fresh EU-IMF loans has set economists guessing how long Greece's meagre finances can last. "From what I hear, Greece can barely hold on until February," Alexandre Delaigue, economics professor at the French military academy Saint-Cyr, told AFP.

The new hard-left government of Prime Minister Alexis Tsipras that took over after the January 25 general election faces a daunting debt repayment schedule this year.

It must repay 9 billion euros to the International Monetary Fund this year, including 2.3 billion in February and March, according to BNP Paribas.

There is subsequently another 6.7 billion euros in bonds held by the European Central Bank which must be paid in July and August, and 15 billion euros in short-term debt held by Greek banks owed throughout this year.

Greece's rejection of new EU-IMF loans, and its insistence on Friday in talking directly to its international creditors without the intervention of lower-level fiscal auditors, has alarmed financial markets.

The yield on Greek 10-year bonds now exceeds 11 percent, an impossible rate for Greece to borrow at today were it to attempt to raise money without EU-IMF protection.

After rebuffing the committee of EU-IMF fiscal auditors known as the "troika," which Finance Minister Yanis Varoufakis dismissed as "rotten" and "anti-European," Greece is asking creditors for time.

"We need time to breathe and create our own medium-term recovery program, which amongst other things will incorporate the targets of primary balanced budgets and radical reforms to address the issues of tax evasion, corruption and clientelistic policies," Tsipras said in a statement to Bloomberg.

The Greek finance ministry on Saturday said it had hired advisory investment bankers Lazard "to advise on issues of public debt and fiscal management."

In 2012, Lazard had assisted Athens in brokering a 50 percent writedown on the country's short and medium-term debt.

Lazard CEO Matthieu Pigasse had said ahead of Saturday's announcement that it was "absolutely necessary" to reduce half the Greek debt held by public institutions, effectively a cut of around 100 billion euros. Tsipras's administration has promised to pull Greece out of a "humanitarian crisis" caused by five years of fiscal cuts with a stimulus program estimated to be worth around 13.5 billion euros, according to BNP Paribas. This includes hiring back thousands of civil servants, restoring the minimum wage and raising pensions, mainly among the poor.

The government says it can find the money by closing tax loopholes employed by wealthy Greeks and by cracking down on smuggling and corruption. Domestic critics note that similar pledges by the socialist administration of George Papandreou in 2009 bore little fruit. Ahead of the election, many Greeks stopped paying their taxes and state coffers are nearly empty. Greek daily Kathimerini has noted that less than 2.0 billion euros remain, and will be used up by the end of February.

"The government is able to finance itself because Greek banks buy its short-term debt issues, and because the European Central Bank supports them. If the ECB turns the tap off, it's over," warned Delaigue.

Credit rating agency Standard & Poor's said in a note on Friday that Greece's top banks had been considerably weakened from a recent outflow of deposits and the weight of existing non-performing loans. "We believe the four banks' liquidity has deteriorated significantly over the past few weeks," the agency said, adding that it had revised their cash position to "very weak." "Depositors have been withdrawing money for weeks, around 5 billion euros in December and 15 billion euros in January," added Adam Memon, economist at Britain's Centre for Policy Studies.