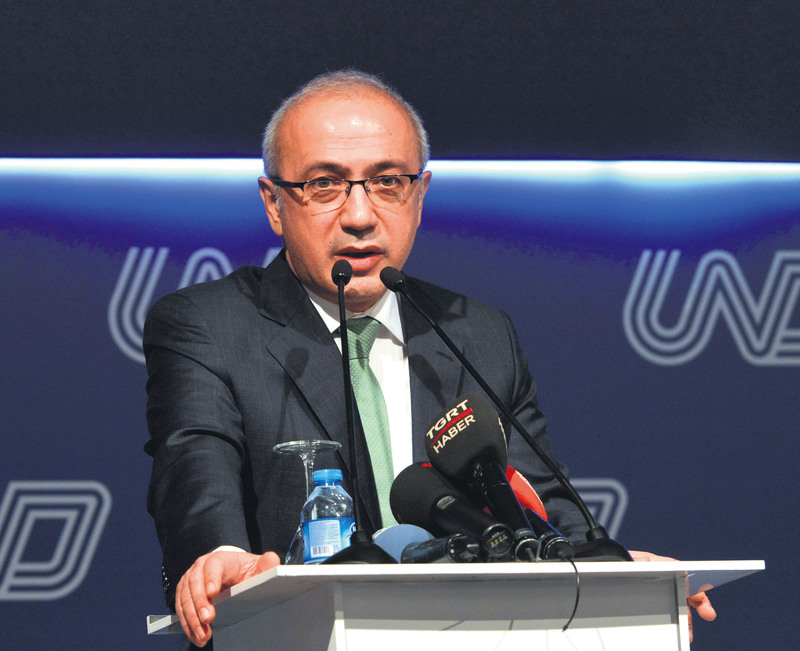 Transportation Minister Lütfi Elvan said that while most Turkish transportation codes have been harmonized with European legislation, the EU is not abiding by its own rules and trying to impose impediments that are not included in the tariffs. Speaking at the 38th Ordinary General Assembly of the International Transporters Association of Turkey (UND), he noted that the transportation industry affects around 77 million people and interacts with almost all sectors. Elvan noted that while there have been problems with the security of traffic with very high accident rates, the number of deaths per kilometer is now less than the average observed in the EU.

Stating that 35 million vehicles were inspected in 2014, Elvan noted that they have provided incentives for scrap vehicles. He also highlighted the importance of alternative routes in transportation and the high number of opportunities in Turkey. "While Turkey has many alternative routes, not many countries have that chance. When we look at all the EU legislation, the free circulation of goods is possible within Turkey and other EU member countries," said Elvan.

Elvan said that when international agreements are considered, the attitude towards Turkish shippers is not just and that as the ministry they will strive to fight against such unequal practices. While Turkey has the right of free movement of goods regarding the customs union agreement with the EU, there are some obstacles that Turkish transporters face like extra tariffs. "We have built up a strong team, and our ministry and the government as a whole have assumed the political risk for decisions related to transportation," said Elvan who highlighted the significance of the UND's activities. UND Board of Directors Chairman Çetin Nuhoğlu said that EU countries are imposing illegal practices, especially on Turkish trucks, causing damage to Turkey's exports. "Unfair competition, highway inspections abroad, long lines at border points and missing transit documents are affecting both our exports and our sector," Nuhoğlu said, adding that they will continue to strive against this as the UND together with the ministry and the government. He also said that they would be filing lawsuits in Vienna regarding this matter.

He further said that since Turkish truck drivers are not visiting EU countries for a holiday, it is illogical to issue tourists visas. Nuhoğlu also underlined that about 22 documents are still requested from drivers with 25 years of experience every six months, which is not acceptable and is causing delays. "We waste a long time at border gates. For example, a delivery that needs to reach Munich in 36 hours can only be delivered in 90 hours due to long lines and unjust practices applied to Turkish drivers, Nuhoğlu said.

Mehmet Yıldırım, an authorized customs broker and former chief customs inspector, said that countries like Bulgaria, Romania and Hungary, which are between Turkey and the biggest European markets, are applying serious restrictions on Turkish freighters. "There are country-based quotas that are not compatible with Turkey's trade potential and location as a transit hub. Each country applies different rules and quotas for foreign freighters, and they mainly aim for Turkish freighters, which are the biggest players in the region. For trucks that exceed these quotas, these countries collect heavy and steadily increasing tolls that create a heavy burden for Turkish freighters. As they pay these tolls or change their routes for a different and usually longer route, the costs of Turkish freighters become much higher than their foreign competitors," Yıldırım said. Nuhoğlu further stated that Turkey's growth is dependent on exports and that competency, competitiveness and strength are important to improve trade. He also noted that an increasing number of European investors are currently manufacturing their products in Turkey, yet problems arising during the export process with Europeans are an obstacle to Turkey's integration with Europe.

Turkish transportation companies are worried about a decision by the Egyptian government that it announced a couple of weeks ago that said that the sea and land transit transportation agreement signed between Turkey and Egypt and between Egypt and Saudi Arabia for roll-on/roll-off (Ro-Ro) ships wouldn't be renewed after it ended on April 23.

Yusuf Hatay, the vice-chairman of private transportation company Hatay Ro-Ro, told Anadolu Agency (AA) that transporters in southern Turkey have faced some problems, particularly after the Cilvegözü Border Gate between Turkey and Syria was closed because of the civil war in Syria. Hatay noted that Hatay Ro-Ro Transportation was established to provide stability on the route to Egypt and to meet the needs of exporters and transporters with the participation of 55 transportation companies in Hatay.

Hatay Ro-Ro became a hope for the transportation sector, said Hatay, adding: "At first, we started to make one shipment a week. In time, we doubled the shipments, and we provide service with a 100 percent occupancy rate."

Hatay also pointed out: "The sea and land transit transportation agreement between Turkey and Egypt and between Egypt and Saudi Arabia will expire on April 23. The Egyptian government had earlier announced that they would not renew the agreement. This will affect the sector negatively." He concluded that Hatay Ro-Ro is an alternative for the transportation sector, but if the route to Egypt is closed, they have no choice but to sell the vehicles.