Currencies melting away in face of the rising dollar, the Turkish lira and the facts

The poor performance of the world's largest currencies against USD over the past year
by Osman Bahattin Dirlik Mar 12, 2015 12:00 am

The cycle of speculative debts, borrowed with zero interest rate from central banks of developed countries and directed to emerging markets, will decline and accelerate loss in value of domestic currencies against the U.S. dollar

The recent rise of the U.S. dollar (USD) against the Turkish lira has raised some questions. Will Turkey fall into a new crisis if the dollar soars further? If so, what consequences would it have? Will the bitter experiences that were faced before the Justice and Development Party (AK Party) reappear?

The truth of the matter is that since the dollar has recently surpassed almost all currencies in the world these are not only questions for Turkey, but of almost all developed and developing countries. While the lira has lost 20 percent of its value over the past year, the Swedish krona (SEK), which is one of the most developed and prosperous countries of the world, has depreciated by 36 percent against the dollar over the past 12 months. Meanwhile, the euro has dropped below the 1.10 level, marking a value loss of 24 percent against the dollar over the past year and there are an increasing number of people who argue that it may even slide below 1. The British pound (GBP) has dropped to 1.52 from last year's 1.72, a fall of around 10 percent. The Japanese yen (JPY) has depreciated by 18 percent, while even the Swiss franc (CHF), which is regarded as the safe haven of the world, has declined by 15 percent. The U.S. dollar index, which reflects the worldwide movement of the U.S. currency, has gained a value of 25 percent over the past 12 years. The currencies of many other countries, including those of Brazil, Indonesia and Poland, are also crumbling to the ground.

The poor performance of the world's largest currencies against dollar over the past year.

The crisis of emerging markets has begun

The facts tell us that an overall "crisis of the emerging markets" has started, as the developing economies cannot regain their previous growth rates. The expected recovery in Europe and Japan can never occur, and the Chinese economy is gradually slowing down. The extraordinary developments in 2014 have also significantly contributed to the slowdown of the world economy and the impact of this seems to be continuing into 2015 as well. For instance, the fact that the Russian economy is expected to shrink by 5 percent or more next year will deal a major new blow to growth efforts throughout Germany and Europe.

Indeed, the U.K.'s well-known investment company, Lord Rothschild RIT Capital, has warned its customers that the world has been facing the greatest geopolitical risk since World War II and that unemployment threatens the prosperity of "weak" Europe.

The U.S. Federal Reserve (Fed) will soon want to make a move to get out of the equation of "zero interest rates, plenty of money" by slightly pushing interest rates up. This will create a new shocking impact on the already fragile world economy. Developing economies will be among the ones which will be most affected by the galloping dollar and the Fed's interest rates hike. The dollar-based debt of developing countries has tripled over the last decade, reaching $5.7 trillion.

As the interest rates rise and the dollar gains value, the rollover of dollar-based debts will be more difficult for companies. The monetary expansion policies of central banks have inflated asset prices and concealed the problems, making them more complicated. The speculative debts, which have been borrowed with zero interest from the central banks of developed countries and been directed to emerging markets, particularly over the past four years, will withdraw rapidly. This vicious cycle will also accelerate the loss of value of domestic currencies against the dollar.

The Turkish finance system is one of the world's best

Following the crises of 1994 and 2001, Turkey has been able to learn important lessons from the bitter experiences. First of all, it has eradicated the troubles within the country. With the great structural reforms in public finance, the state's balance of income and expenditures has been settled in perfect order. Furthermore, the financial sector has been regulated. Today, Turkey is proud of having one of the world's strongest and most-tightly controlled financial structures.

In 2014, the ratio of Turkey's public debt to its gross domestic product (GDP) was realized at 33 percent, which was a great success. This ratio is 90 percent and 90.6 percent in the EU and the U.K., respectively. As far as developing countries are concerned, it is around 67 percent in India and around 56 percent in Brazil. Turkey has the best ratio among all these countries, which should instill a great element of confidence in foreign investors. 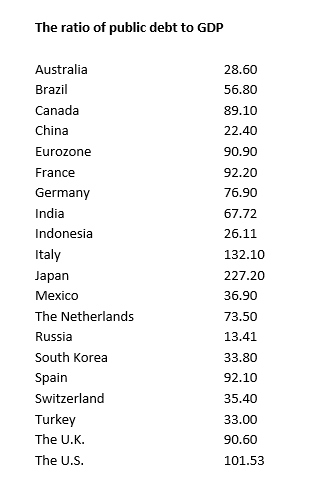 As the table above shows, Turkey, which does not compromise on fiscal discipline, is increasingly becoming world-class level.


The quality of external financing has improved

The quality of external financing in Turkey has also begun to get better. The share of portfolio investments and short-term debts in external financing has dropped from 81 percent to 56 percent. This is certainly good news for Turkey since it needs external financing due to its current account deficit. Thus, Turkey is placing itself in a stronger position to mitigate external shocks.

As known, Turkey exports the majority of its goods to European countries. However, the negative developments in Europe are decreasing demand and this is having harmful impacts on Turkey's exports. It is not only Turkey, but all developing countries and China, the world's largest economy in terms of purchasing power parity, which exports the majority of their goods to the EU.

To allow is one thing, but failure to control is quite another

With the combination of all these factors, the dollar is soaring against the lira, as is the case of all other currencies, and Turkey is allowing this to happen for the moment. To allow it is one thing, but failure to curb it is quite another. Turkey is not the only country that is displaying such prudence and vigilance and many developed countries whose currencies are melting away, including the U.K. and Sweden, are also on full alert.

At this point, the excellent strategy that Turkey is implementing should be understood. Curbing the current account deficit is important for Turkey. The upsurge in the dollar makes export articles relatively cheap by reducing the part of domestic consumption that is satisfied by imports. Thus, Turkey also aims to drop its current account deficit. The combination of low interest rates together with low oil prices will have the significant effect of making domestic consumption and investments possible.

The rising demand for the dollar should never be evaluated in a state of panic, as this rise is far from that of a crisis environment. We are in an atmosphere that cannot be compared with those of previous crisis periods. The political authorities will likely manage the current situation very well and should not make concessions to those ill-intentioned figures who want to turn the movement of the dollar into an opportunity.

It would be clear shortsightedness in the simplest term to argue that the Turkish economy, which has been managed with meticulous professionalism over the past 14 years, is being undermined by the architect of this management. It should be acknowledged by all reasonable people that strategic moves of the state would not be made in a haphazard fashion by President Recep Tayyip Erdoğan, who has already proven his professionalism at the highest level. It should be noted that if the head of state takes a step toward the "new Turkey," the consequences must have already been thoroughly thought out and its pros and cons must have been calculated carefully.

Contrary to some baseless criticism, Prime Minister Ahmet Davutoğlu's recent talks with foreign investors are extremely reasonable. Like the world's other great leaders, he personally told investors that the pessimistic atmosphere that some try to create inside the country does not match macroeconomic facts, and explained Turkey's targets and its robust financial structure with a professional approach. He outlined expectations and economic administration. Thus, he is breaking up the negative atmosphere that the "interest rate lobby" is trying to create in Turkey in person. Unsurprisingly this is being received very well from outside.

It should be acknowledged that the economy is not only the economy, it is also a management of expectations. There will always be different powers that want to manage expectations.
Last Update: Mar 13, 2015 11:13 am
RELATED TOPICS