Economy administrators agree on a six-step plan for growth 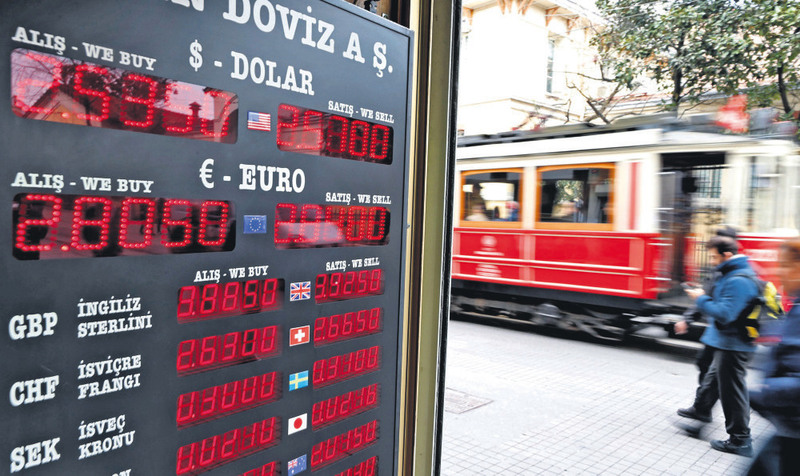 Low interest rates to be provided by state-owned banks to protect local businessmen and a common voice on the economy especially on exchange rate fluctuations, topped the agenda of the eight-hour summit of economy heads

A six-step economy plan was announced after an eight-hour economy summit against speculators chaired by Prime Minister Ahmet Davutoğlu. Accordingly, various instruments will be implemented to revive the domestic market and production. Ziraat Bank and Halk Bank will offer low-interest credits to local tradesmen and the real estate sector. Further, various precautions will be taken against those trying to manipulate the foreign exchange market, risk perception will be eliminated, and investor companies will be instructed on what to do. The transformation package, which is worth TL 30 billion ($11.45 billion), will be immediately implemented to improve the real estate sector.

Nine ministers, Central Bank of the Republic of Turkey Governor Erdem Başçı and relevant bureaucrats attended the meeting. According to a statement from the Prime Ministry after the summit, a support package for industrial production and employment will be implemented.

The statement further said that the central bank, which has complete freedom with regard to the use of monetary instruments, is taking the required precautions in line with its monetary policy targets.

The following steps will be taken according to the economy package, which will have medium- and long-term effects.

Low-interest loans: Instruments to revive the domestic market and increase production and employment will be implemented. Ziraat Bank and Halk Bank will offer low-interest credits to the public. The scope of micro-finance support provided to those wanting to start their own businesses will be expanded. More loans will be offered to small businesses and public banks are to increase the number of branches in eastern and southeastern Anatolia and offer loans to exporters. Funds will be injected to special private sector areas that meet the requirements of the Treasury, and more support will be provided to new entrepreneurial projects. Banks will be encouraged to offer more loans to industry.

Costs to be lowered: A package to support commercial production, employment and the capital structure of companies will be implemented before the general elections. The incentive system will be improved and steps to lower costs will be taken along with steps to support investments. The 25 Primary Transformation Program, announced by Davutoğlu, will be implemented. With this package, which will be around TL 30 billion, matters given in the government's program related to inflation and the current account deficit should be implemented quickly.

Common voice on the economy: All institutions and parties related to the economy will have a common voice, especially on matters related to foreign exchange fluctuations. High interest rates, which are a barrier to investments, will be discussed in a very sensitive way. The central bank's policies will be supported, and the interest rate policy will also be supported to achieve stable and strong growth. The Banking Regulation and Supervision Agency, which noted that the depreciation of the lira in Turkey exceeds depreciations experienced by other developing countries, will continue its duties to regulate and supervise with great caution and discipline. With the decrease in crude oil prices, the current account deficit and inflation rates are expected to be better than previously estimated. Financial discipline will be ensured within the scope of the Medium Term Program.

No speculation allowed in the foreign exchange market: Special measures will be taken against any kind of speculations in foreign exchange markets, and all institutions will act against any speculators trying to claim that Turkey is in an economic crisis. Related institutions will submit all information they have of such speculators to the government.

Investors will be protected: Investors will be informed and reforms will continue to be implemented. Steps will be taken to increase the attraction of free zones. Investments, which were around 15 percent last year, will be increased to 19 percent. The omnibus bill on the economy submitted to Parliament will be approved before the general elections.

Concerning decisions made during the economy summit, Deputy Prime Minister Numan Kurtulmuş assured that there is no need to worry, noting that the Turkish economy is well-prepared for some fluctuations and that it has a robust macroeconomic structure to withstand them.

Kurtulmuş also said that their next primary objective for the economy is to boost the will for economic and political reforms on the way to achieving the 2023 goals. While these reforms continue, the government will simultaneously take steps to enhance the economy's production capacity. During the meeting, these were thoroughly and meticulously addressed in terms of growth, currency and interest markets and Turkey's attraction of foreign capital, Kurtulmuş added.

Erdoğan meets with Babacan and Başçı

President Recep Tayyip Erdoğan received a briefing from Deputy Prime Minister Ali Babacan, who is responsible for the economy, and Central Bank of Turkey Governor Erdem Başçı yesterday. The meeting was on the agenda for two months and attracted the attention of the markets because of Erdoğan's frequent criticism of the bank about high interest rates, which he claims is a barrier against production and growth. Babacan and Başçı informed the president about the economic summit held to discuss exchange rate fluctuations and the current economic situation on Tuesday, which was chaired by the Prime Minister Ahmet Davutoğlu, attended by eight ministers and relevant bureaucrats and lasted for almost eight-and-a-half hours. Although the bank has maintained its cautious cuts, Erdoğan, the government and the central bank agree on further interest rate cuts. Before the meeting, Economy Minister Nihat Zeybekci said that briefing meetings with Erdoğan will become routine with different ministers.

The interest rate policy of the Central Bank of the Republic of Turkey (CRBT) left its mark on the meeting. Reportedly, topics such as President Recep Tayyip Erdoğan's criticism of the interest rate policies and the significance of working in harmony with the government were also addressed during the meeting. The CRBT was asked to pay attention to the objectives of a strong and growing Turkey while determining its interest rate policies. The fact that high interest rates constitute the greatest obstacle to investments and the need to use all available instruments against the currency lobby were highlighted.
RELATED TOPICS