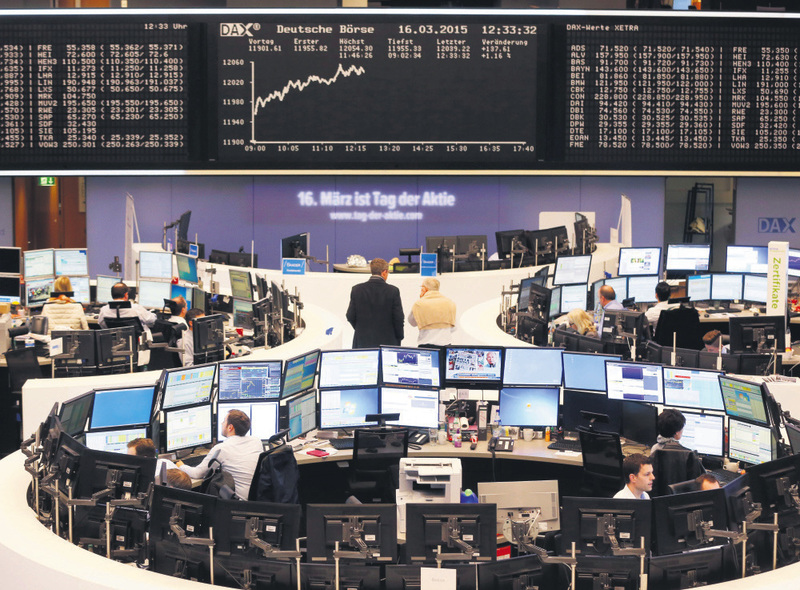 In an indication of the impact of the ECB's 1 trillion euro bond-buying program, a composite purchasing managers' survey for the 19 members of the eurozone jumped to a near four-year high above forecasts

The euro rose and European shares edged up yesterday, responding to signs the eurozone economy is gaining momentum, while a slowdown in factory activity in China kept oil and commodities-linked assets under pressure. In a sign the European Central Bank's bond buying program may already be paying dividends, a composite purchasing managers' survey for the 19 members of the eurozone jumped to a near four-year high of 54.1 in March, well above forecasts.

The euro gained 0.4 percent in early European trading to hit a six-day high of $1.1001, adding to a recent rally after the single currency last week registered its best performance against the dollar in 3-1/2 years. At 0850 GMT, the FTSEurofirst 300 index of top European shares was up 0.1 percent at 1,602.56 points, having lost 0.7 percent on Monday. "The environment for the eurozone is getting extremely positive: low interest rates, a weakening euro and falling commodity prices, coupled with strong action from the ECB," said Christian Jimenez, fund manager and president of Diamant Bleu Gestion, in Paris. "The only big risk seen in the medium term is the prospect of a rate hike by the Fed, but that's mostly priced in already." San Francisco Federal Reserve Bank President John Williams said on Tuesday the strong dollar would drag on U.S. growth this year, though the economy was strong enough to handle it. The dollar plunged last week after the Fed cut its inflation outlook and its growth forecast and the market pushed out its consensus of when the Fed will raise rates to at least September. On Tuesday the dollar was down 0.3 percent against a basket of major currencies at 96.759, well below its 12-year peak of 100.390 struck on March 13.

Brent crude oil held close to $56 a barrel on the signs of slowing growth in China and as Saudi Arabia said its production was close to an all-time high. The China flash HSBC/Markit Purchasing Managers' Index (PMI) dipped to 49.2 in March, below the 50-point level that separates expansion from contraction. Economists polled by Reuters had forecast a reading of 50.6, slightly weaker than February's final PMI of 50.7. The private survey is likely to add to calls for more monetary easing from Beijing. "China is the big risk," said Ian Stannard, head of European FX strategy at Morgan Stanley in London. "It can put the whole of Asia ex-Japan under pressure and there is some feed-through to G10 through the commodity currencies." The Shanghai Composite share index ended slightly higher, gaining for a tenth straight day in a rally that has pushed major Chinese indexes to their highest levels in nearly 7 years. Japan's Nikkei stock average slipped 0.2 percent, pulling away from the previous session's 15-year highs. In Japan, a similar manufacturing survey added to concerns that its slowly recovering economy also may be losing momentum, with activity expanding at a much slower clip as domestic orders contracted. Ahead of a closely watched Spanish inflation-linked debt sale, Spanish and Italian 10-year bond yields rose 4 basis points in early trading to 1.30 and 1.33 percent, respectively. German equivalents - the eurozone benchmark - were flat at 0.22 percent.