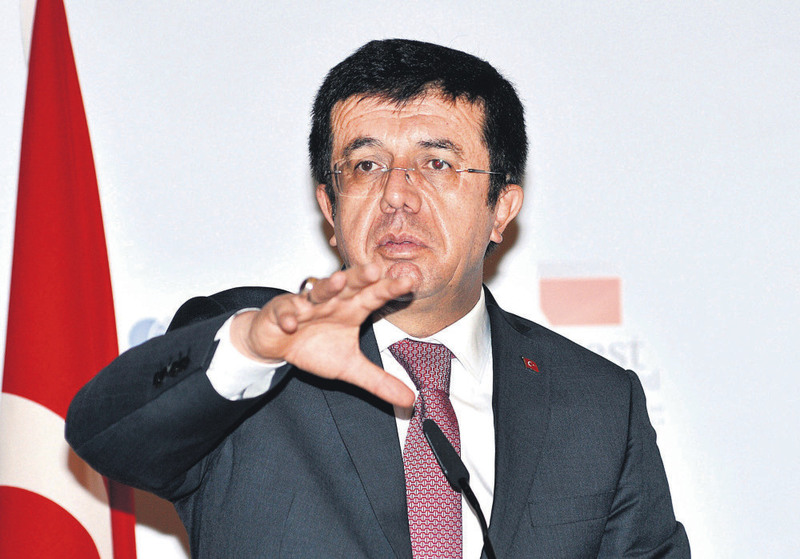 The government has set ambitious targets for Turkey's economic growth rate. However, regional issues affect the country's trade volume in addition to fueling currency volatility, which has lowered expectations

Economy Minister Nihat Zeybekci announced that the growth figures for the first quarter of 2015 will not be at the expected level, answering questions from journalists following the Turkey-Poland Business Forum yesterday, but it will also not be zero or negative. Additionally, he said that they are expecting an improvement in Turkey's economic growth rate after the second quarter.

Economy Minister Nihat Zeybekci said delaying the interest rate cut costs Turkey $15 billion, and stressed that it is the government's right to ask for rates to be decreased to reasonable levels. "The rates would have been reduced before the currency fluctuations. There are still steps to be taken for the interest rate cut, however," he said.

The medium-term economic program was announced in October by the government. It was estimated that the growth rate for 2014 will be 3.3 percent, while an improvement of 4 percent growth was targeted for 2015. The government also hopes growth will be consistent at 5 percent for 2016 and 2017. On the other hand, trade with the biggest trade partners of Turkey, like the EU, Iraq and Russia, has lost volume. The trade volume between Turkey and Iraq dropped 8.9 percent last year, while it reduced 14.6 percent with Russia due to the financial problems the country is experiencing with the lost value of the Ruble caused by EU and U.S. sanctions due to the Ukraine conflict. Zeybekci stressed that the local market's contribution to growth is expected to be higher in 2015. However, since foreign trade in the form of exports has been at negative levels within the first quarter, the growth rate is expected to be lower than expected. Within the first two months of 2015, Turkish exports decreased by 3.5 percent, including gold, and by 11 percent, excluding gold. Furthermore, while Dollar-Euro parity was around 1.36 in the first two months of 2014, it dropped to 1.16 in January 2015 and to 1.11 in February 2015. Zeybekci said if parity was the same as in 2014, then Turkey's exports would have increased by 6 percent. "In other words, in terms of quantity, our exports have increased. Therefore, I believe that the increase in quantity will help improve growth," Zeybekci emphasized.

The minister added that exports will start recovering in March, and will reach the required level after second quarter growth. On whether the growth figures for the first quarter will affect the medium-term economic program, Zeybekci said, "While the figures for the first quarter will be lower than the figures in the program, growth will still be positive. And with the precautions our government has taken to revive the markets, we are expecting an increase in growth and employment as of the second quarter of 2015." He also predicted that economic stagnation, which has been ongoing for the last few years, will also come to an end as of the second quarter.

Turkey and Poland to combine forces

Turkish and Polish entrepreneurs should combine forces and increase their trade volume, Economy Minister Nihat Zeybekci said yesterday. Speaking at the opening of a Turkey-Poland Business Forum in Istanbul, Zeybekci said the two nations are "the best complementary countries."

"There are many things that Poland has, but Turkey lacks and vice versa," the minister said. He called on entrepreneurs from the two countries to get together to increase the trade volume between the two states. "But reason dictates something else as well: Do not focus on Poland only. Do business together with Poland's neighbouring countries as well. Likewise, Polish and Turkish entrepreneurs should do business with Turkey's surroundings states," Zeybekci stressed. The minister said the trade volume between the two countries had increased to $5.5 billion, and voiced his expectation that the figure will rise to $10 billion.
Last Update: Mar 27, 2015 6:48 pm
RELATED TOPICS