Economy Minister: 2015 to become the year of investors 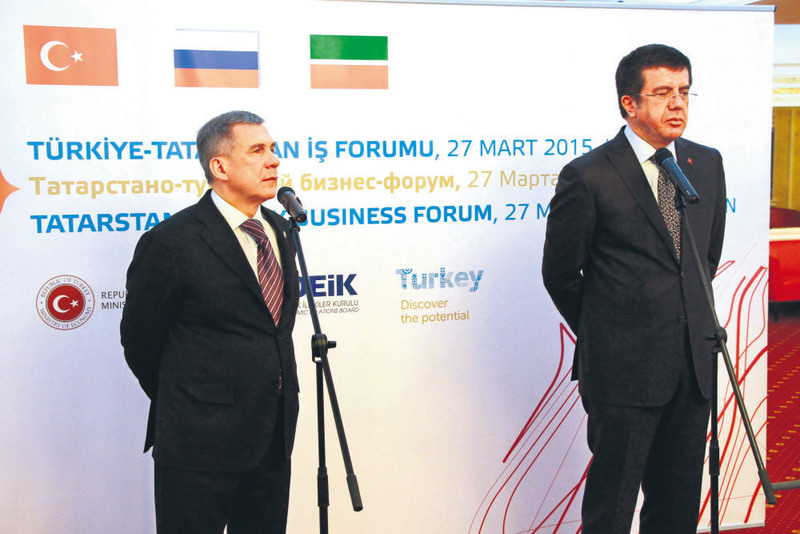 One day after stating that the growth rate of 2015's first quarter will not cover expectations, Economy Minister Zeybekci released a statement saying the government is aiming for this year to be investors' year with governmental supports

Economy Minister Nihat Zeybekci said yesterday that 2015 will be the year investors will implement their investment decisions. Zeybekci touched on the data of investment support in January and February of 2015 in his written statement released on Friday and indicated that as part of the Decree on State Grants for Investments, 720 investment incentive certificates equaling TL 32.7 billion ($12.5 billion) have been issued.

On Thursday, Zeybekci had said that Turkey's growth rate for the first quarter of 2015 will not satisfy expectations, even though it will not be equal to or fall below zero. The contribution of exports in growth was 2.7 percent in 2014 and without exports, the growth rate would be close to zero. Last year, the local market made almost no contributions to growth. After lowering the expectations on growth with reasonable points, his statement was viewed as an effort to encourage investments. The 376 certificates issued in February in total equal to a fixed investment amount of TL 5.8 billion and will create around 13,500 employment opportunities. While 350 out of the 376 investment incentive certificates have been issued to local companies, 26 have been issued to international companies.

Zeybekci said that TL 1.3 billion of the fixed investments are expected to be funded by international companies and TL 4.4 billion by local companies. Last year, only 632 certificates equaling TL 11.6 billion and creating 22,190 job opportunities had been issued within the same time last year. The number of investment incentive certificates issued in January and February of 2015 have increased by 14 percent, the fixed investment amount by 181 percent and employment by 8 percent when compared to last year. "The extreme increase of 181 percent in fixed investment projects is due to the implementation of mega projects," Zeybekci said.

Out of the TL 32.7 billion fixed investment amount, TL 24.7 billion has been granted to the energy sector, followed by TL 5.4 billion to the services sector, TL 2.6 billion to the construction sector and TL 38 million to the mining sector.

Zeybekci said that they are expecting this increasing trend to continue throughout the rest of the year, both for investment amounts and also for certificates and job opportunities.
Last Update: Mar 28, 2015 5:07 pm
RELATED TOPICS