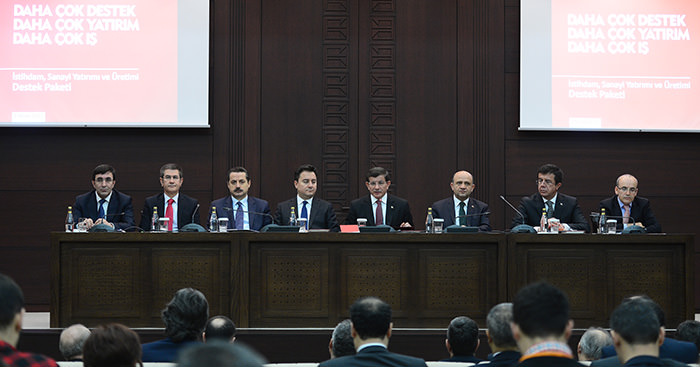 "In today's 11-step precautionary package, we aim to take some important steps that will enhance production, employment and industrial investment," said Davutoğlu.

Davutoğlu said that the cost of the new economic package, which will boost employment and industry, totals TL 7.5 billion ($2.9 billion). He further stated that this cost will not have a negative effect on the planned budget, and the precautions will mostly be financed by an unemployment fund.

Davutoğlu went on to say, "We will provide an additional 120,000 jobs for public interest, as well as providing additional support for manufacturer SMEs and female entrepreneurs." He added that he would be signing the enactment on Thursday.

The prime minister announced that net minimum wages would be paid by the Institution for Providing Jobs and Employees (İŞKUR) to trainees who attend six-month on-the-job training in private sector offices, as part of new incentives. Davutoğlu said that the expenses spent by companies for the training would be deducted from their taxable income. If the trainees are hired in the same line of business, the employer's national insurance contribution for 42 months in the construction sector and for 30 months in other sectors will be paid by İŞKUR. Further, if on the job training starts before July 2015, companies will be able to benefit from the incentive for an additional six months.Furthermore, the new package will provide additional support for investors in research and development and design.

Davutoğlu continued by saying, "As I announced on Tuesday, we will add an additional TL 100 to the wages of retirees who currently receive a salary of less than TL 1100. This means an additional funding of TL 4 billion to be transferred to our five million retired citizens."

The new package was praised by Turkish businessmen and investors. Union of Chamber and Commodity Exchanges of Turkey President Rifat Hisarcıklıoğlu released a written statement regarding the new investment package and said it reassures the Turkish business community. Hisarcıklıoğlu said that they follow the problems of real sector through 365 chambers and commodities, and they give feedback to the government. "We are pleased to see that our concerns and proposals have been responded to," said the chairman.

Davutoğlu announced that higher tax discounts will be provided for all income earned within the 2015-2016 investment period.
Incentives for investments in advanced technologies

"While investment contribution for expenses was between 0 to 80 percent, this will be increased to 50 to 80 percent. Investments in advanced technologies will be deemed as priority investments and benefit from fifth region incentives," added Davutoğlu.

Incentives provided to cities included in the fifth region, such as Erzurum, Adıyaman and Kilis, to support production in strategic sectors have been extended to all regions that invest in advanced technologies.

In addition, more support and tax discounts will be available to investors. Tax discounts and incentives provided for the employer's national security contribution in 2014 would continue to be applied for investments that will commence until Dec. 31, 2015.

There are six regions in Turkey that are defined by the government according to their development levels to make sure that the least developed ones gets the greatest support.

Input costs of industrialist will decrease

The Resource Utilization Support Fund applied in the import of investment goods and intermediate goods will be decreased to 0 from 6 percent, thus decreasing input costs of industrialists.

Access for women entrepreneurs to funds will be facilitated

Turkish Development Bank will be restructured

Davutoğlu also announced that the Turkish Development Bank would undergo a crucial restructuring process to provide the support needed by all these new development and employment projects and to be able to compete with other development banks in the world.

To facilitate access for SMEs to financing opportunities, regulations will be implemented to eliminate obstacles before immovable assets to be pledged as securities.

"We will fight with cyclical problems arising due to changes in foreign exchange rates in the near future," added the prime minister, who noted that the budget would become stronger.
Increase in both unemployment rates and employment.

The government is resolute on pursuing an economic growth target of 4 percent for 2015, said Prime Minister Davutoğlu.
"Turkey grew by 2.9 percent in 2014, compared to a 0.8 percent growth for Eurozone countries over the same time period," Davutoğlu continued.

The Turkish Statistical Institute, TurkStat, announced on Tuesday that the country's growth rate was 2.6 percent for the last quarter of 2014, and annual growth stood at 2.9 percent, both of which were higher than previously estimated.
Last Update: Apr 02, 2015 6:01 pm
RELATED TOPICS