Recovery in Japanese business mood stalls, costs to be cut 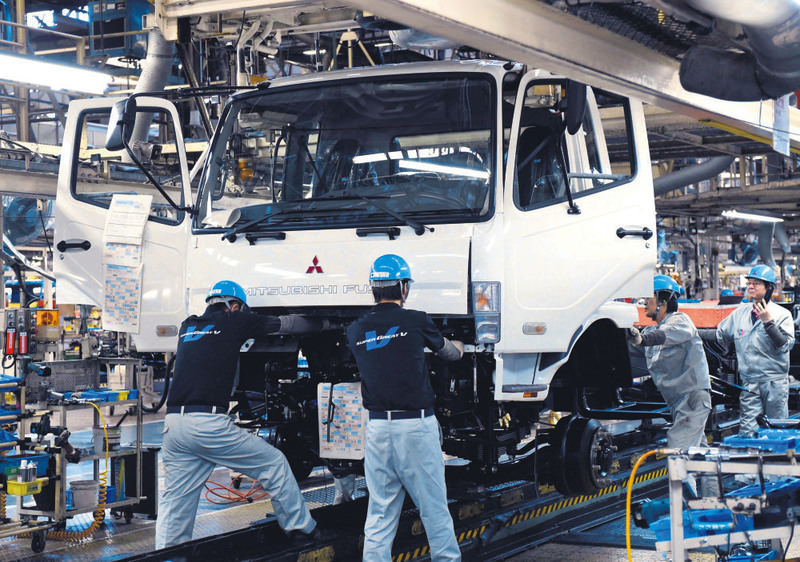 Despite reaping strong profits from a weaker yen, big manufacturers were no more confident than they were three months ago, with some citing sluggish domestic and Asian demand

A key Japanese central bank business survey has shown that big companies plan to cut spending, clouding the outlook for Prime Minister Shinzo Abe's drive to reflate the economy and spurring calls for more monetary stimulus. But underscoring the patchy nature of Japan's recovery, service-sector firms in the survey released on Wednesday saw business conditions improving to a nearly one-year high, thanks to low oil prices and surging tourism. The closely-watched "tankan" survey will be among data Bank of Japan policymakers scrutinise at a rate review next week for clues on whether their massive asset-buying programme is working its way through wider sectors of the economy. Kozo Yamamoto, a ruling party lawmaker and one of the architects of Abe's reflationary policies, said the BOJ must ease further on April 30 - when it meets for the second time this month to produce new long-term forecasts.

"The economy is at a standstill and prices are seen falling ahead. To do nothing isn't an option for the BOJ," Yamamoto, a close aide to Abe, told Reuters. Many BOJ officials are reluctant to expand stimulus soon, hoping to scrutinise the effect of October's monetary easing. But they may come under pressure to act if inflation stalls not just because of falling fuel costs but of weak domestic demand, analysts say. Many market players expect the BOJ to ease again sometime in 2015, although those forecasting an April action are a minority. Adding to the murky economic outlook, a separate survey on Wednesday showed that expansion in manufacturing activity slowed in March as domestic orders shrank for the first time in about a year.

Lower capital expenditureBig firms expect to cut capital expenditure by 1.2 percent in the new fiscal year, confounding market forecasts of a 0.5 percent increase. Both manufacturers and non-manufacturers expect conditions to worsen slightly in the coming three months, a worrying sign for the BOJ as it prints money aggressively in the hope of nudging companies and households to boost spending.

"The capital expenditure forecasts also raise doubts about the likelihood of achieving the BOJ's inflation target," he said.

Tourism boomThe survey showed big manufacturers maintained their conservative dollar-yen forecasts and were cautious about business conditions despite projecting increases in sales and profits in the year that began on Wednesday. "Manufacturers know that while the weak yen is a boon to their profits, that's an external factor. That's why they may feel uncertain on the outlook," said Ko Nakayama, a senior BOJ economist who briefed reporters on the tankan. An index showed companies saw overseas demand softening with some complaining of sluggish demand in China, which may also explain the gloomy mood among manufacturers. Non-manufacturers, on the other hand, saw slumping fuel costs make up for rising import prices from a weak yen. A surge of Asian tourists shopping in Japan also boosted retailers' sales, the survey showed.