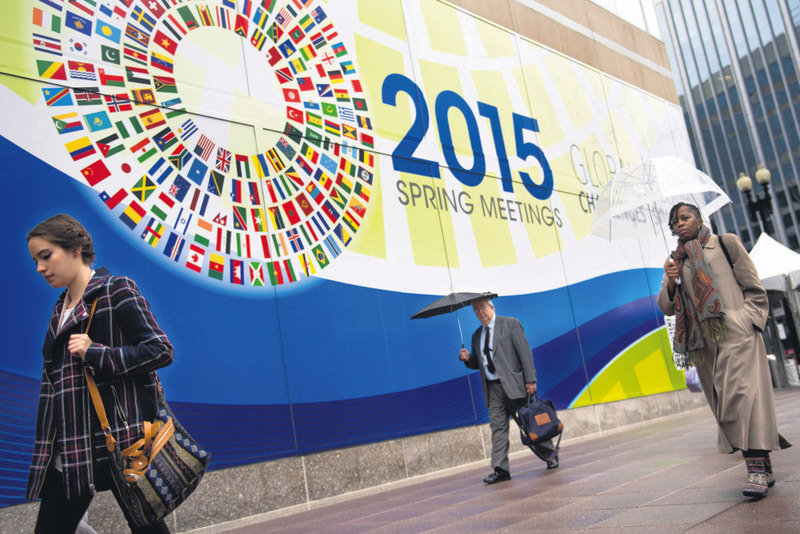 The International Monetary Fund sees global growth at 3.5 percent this year, unchanged from its January forecast while revising Turkey's growth forecast for 2015 down and up for 2016

IMF chief economist Olivier Blanchard said that global economic growth will be "moderate and uneven" in 2015 amid a pickup in rich countries and a slowdown in emerging markets and developing economies. The Washington-based crisis lender forecasts a global expansion of 3.5 percent this year, compared to 3.4 percent in 2014.

In recent months, the crash in oil prices and large swing in exchange rates among major currencies has contributed to an "unusually complex set of forces shaping the world economy," Blanchard said.

"Legacies from both the financial and the euro crises are still visible in many advanced economies," he said. "To varying degrees, weak banks and high levels of debt - public, corporate, or household - still weigh on spending and growth. Low growth, in turn, makes deleveraging a slow process."

IMF cuts forecast for US economy, upgrades Europe and Japan

The International Monetary Fund, citing the consequences of a strong dollar, is downgrading its outlook for the U.S. economy but raising its forecast for Europe and Japan.

The IMF forecast that the 18 European countries that use the euro currency collectively will expand 1.5 percent in 2015 and 1.6 percent in 2016, up from a January forecast of 1.2 percent growth this year and 1.4 percent next. The eurozone grew just 0.9 percent last year.

The IMF expects the world economy to grow 3.5 percent in 2015, barely up from 3.4 percent last year and unchanged for its January forecast. It raised the outlook for global economic growth in 2016 to 3.8 percent, up from a January forecast of 3.7 percent.

The international lending agency also left unchanged its prediction that the Chinese economy will grow 6.8 percent this year and 6.3 percent in 2016. That marks a sharp deceleration from last year's 7.4 percent expansion, already the slowest for China in two decades. But Gian Maria Milesi-Ferretti, the IMF's deputy director for research, told reporters the slowdown in China reflects the country's transition from growth built on often-wasteful investment in factories and real estate to slower but steadier growth built on spending by Chinese consumers. "We think it is a good slowdown for China," he said.

Most of the world's economies are benefiting from sharply lower oil prices. The price of a barrel of oil has plunged to less than $52 a barrel, half what it was a year ago. Since June 30, the U.S. dollar has climbed 29 percent against the euro and 19 percent against the Japanese yen. A strong dollar makes U.S. products more expensive, giving European and Japanese exporters a price advantage.

Moreover, the Federal Reserve is expected to raise short-term U.S. interest rates this year after keeping them near zero for more than six years. The European Central Bank and the Bank of Japan are moving the opposite direction, pursuing easy money policies meant to stimulate economic growth.