Turkey and Kazakhstan to cooperate in boosting trade throughout Eurasia 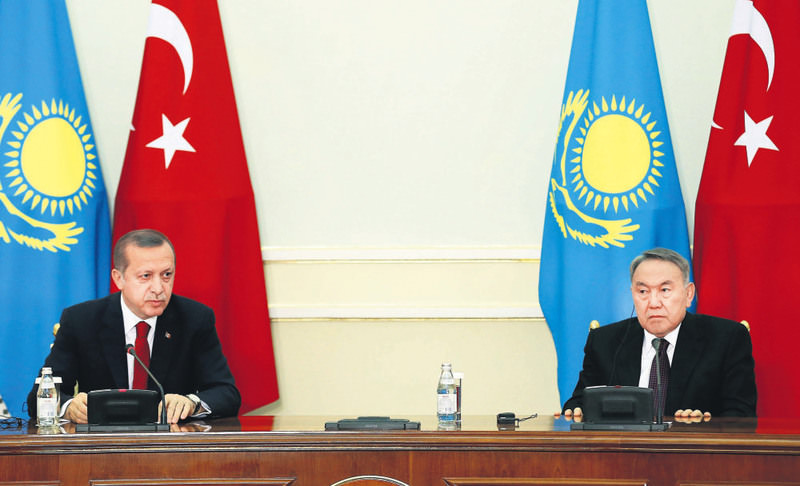 Turkey and Kazakhstan aim to reach a $10 billion trade volume and $500 million in investments. Turkish President Recep Tayyip Erdoğan paid an official visit to Astana, the capital of Kazakhstan, yesterday where he met his counterpart Nursultan Nazarbayev and attended the Turkey-Kazakhstan High Level Strategic Cooperation Council meeting. Erdoğan and Nazarbayev chaired the second meeting of the council after holding private talks.

After the council meeting, Erdoğan and Nazarbayev held a joint press conference, signing the joint statement regarding the results of the High-Level Strategic Cooperation Council.

Nazarbayev emphasized that the trade volume between Turkey and Kazakhstan has remained at $3.4 billion because of the recent severe global economic conditions.

Nazarbayev pointed out that they have launched a new economic program called "Nurlu Yol," or the Bright Path, in November 2014, as a measurement against the crisis. He added that they wanted to include economic development cooperation with Turkey within the scope of the economic program. Stressing that they had a desire to establish joint organized industrial zones with Turkey in Kazakhstan, Nazarbayev said, "We aim to increase investments to $500 million and trade volume to $10 billion annually."

Touching on the Silk Road project, which aims to establish a new economic zone between Europe and Asia, Nazarbayev stated that they were in agreement to create a joint investment fund with Turkey. "Turkey wants to open up to Asia via our country, while we want to open up to Europe and the Middle East via Turkey," remarked Nazarbayev.

Erdoğan said, "As two big countries of Eurasia, Turkey and Kazakhstan have huge potential. Kazakhstan has a critical position in terms of connecting the Middle East with international markets via the Caspian Sea. The projects to be carried out here will contribute to welfare and stability in the region."

Reminding the public that they increased the level of bilateral relations between Turkey and Kazakhstan to strategic partnership in 2009, Erdoğan noted, "We brought a corporate mechanism to it by means of establishing the High-Level Strategic Cooperation in 2012."

Erdoğan pointed out that "if there is no aim, no dream, it is not possible to achieve results." The Nurlu Yol economic program, which has been announced recently, is a significant project that can carry the country to the center of transportation and logistics. I also believe EXPO 2017 will contribute significantly to the promotion of Kazakhstan. During all these processes, we will continue to stand by our Kazakh brothers.

Nazarbayev further commented on the bilateral relations of Turkey and Kazakhstan. He said in his speech that they discussed with Erdoğan in the meeting how they would deepen bilateral relations in the fields of trade, economy, investment, industry and transit transportation, as well as cultural and humanitarian relations. Pointing out that there were 1,600 Turkish companies in Kazakhstan and Turkish businessmen had carried out many projects valued at nearly $20 billion since Kazakhstan's independence, Nazarbayev invited the Turkish business world to join 25 new projects in Kazakhstan, which will host EXPO 2017.
Last Update: Apr 17, 2015 11:49 am
RELATED TOPICS