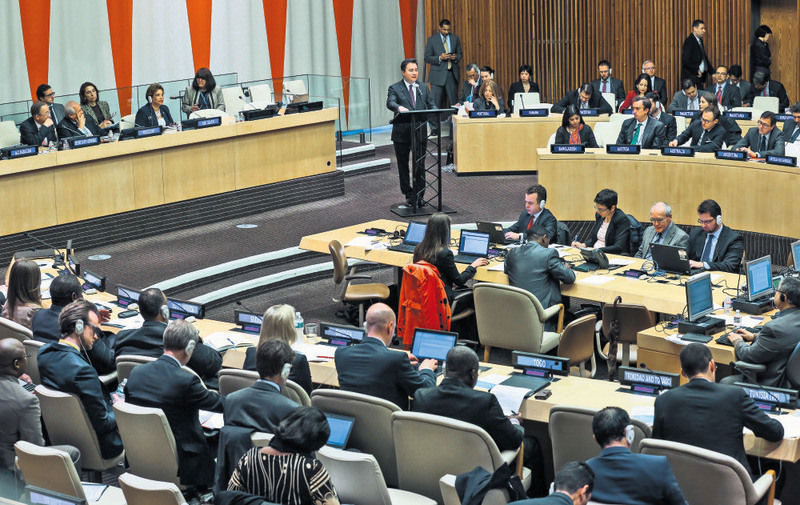 by Anadolu Agency Apr 21, 2015 12:00 am
Deputy Prime Minister Ali Babacan said despite positive developments, the global economy was against severe tests such as currency fluctuations. In a meeting focusing on financing for sustainable development held by the U.N.'s Economic and Social Council, Babacan explained Turkey's G20 priorities and development perspective as term-president. Noting that even though it has been seven years since the global crisis, fast and sustainable development cannot be achieved. However, Babacan said that there were some promising signals in the larger economies, which were expected to affect other economies in a positive way.

Babacan emphasized that while some of the emerging economies achieved strong growth, others could not gain the same speed. "Despite the positive developments, tests in global economic outlook are still out there. One of the most serious tests is currency fluctuations, which have been witnessed recently. One reason for this is the monetary policies of the developed economies," stressed Babacan. In addition to saying that monetary policies have reached their limits, Babacan said that fiscal policies should be flexibly practiced to support growth without jeopardizing the medium-term economic expectations.

Emphasizing that governments should put structural reforms into effect quickly, Babacan said, "We should not forget that central banks can only open windows of opportunity so that governments can perform the right reforms." Saying that different countries have different needs, Babacan stressed that there were reforms to develop the labor force market, production, social security and investment climate, which were among those needs. Expressing that those reforms will be used as a base to overcome the global crisis, he remarked, "Monetary or fiscal policies cannot be enough alone to achieve sustainable global development." Highlighting that growth and development of countries can be achieved by the private sector, Babacan added, "Independently of how loose fiscal policies are or how much money the central bank prints, if the private sector lacks trust in the future and it is worried about employing more people, growth and unemployment targets cannot reach our expectations." Babacan said humanitarian crises also have a negative impact on development targets, adding that the current approach is seen to fail in terms of long-term crises. He said Turkey was specifically experiencing this problem with the Syrian crisis. "In times of humanitarian crises, developed countries should shift their resources to development budgets in those crisis regions," Babacan emphasized, adding that Turkey would provide some offers to finance humanitarian crises during the World Humanitarian Summit, which will be held in Turkey next year.
Last Update: Apr 21, 2015 11:52 pm
RELATED TOPICS