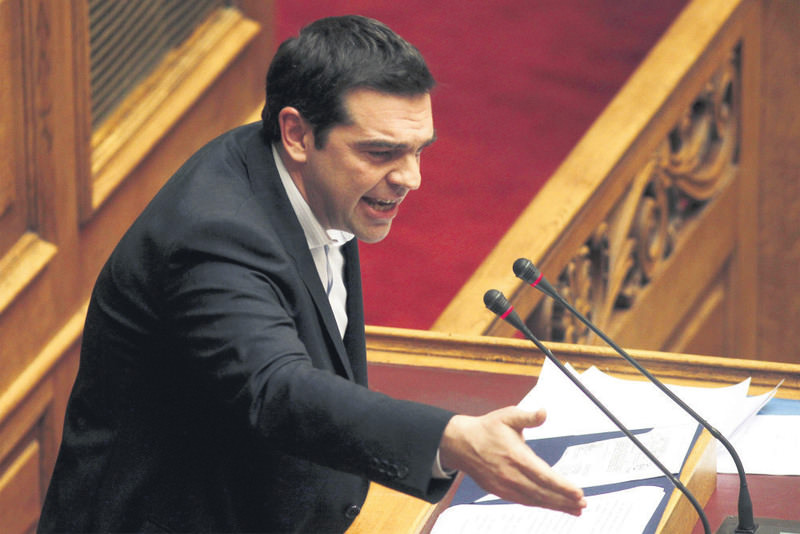 Greek PM Tsipras delivers a speech during a plenary session of parliament in Athens. Tsipras called on local governments to keep their funds in the central bank.
by Bloomberg Apr 21, 2015 12:00 am

Running out of options to keep his country afloat, Greek Prime Minister Tsipras ordered local governments to move their funds to the central bank

With negotiations over bailout aid deadlocked, Greek Prime Minister Alexis Tsipras needs the cash for salaries, pensions and a repayment to the International Monetary Fund (IMF). Greek bonds fell after the move, pushing three-year yields to the highest since the nation's debt restructuring in 2012. The order was questioned by local officials and slammed by the leading opposition party.

The decree to confiscate reserves now held in commercial banks and transfer them to the central bank could raise about 2 billion euros ($2.15 billion), according to two people familiar with the decision. It shows how time is running out for Tsipras, a point made by European officials who addressed the matter at IMF meetings in Washington in recent days.

"Central government entities are obliged to deposit their cash reserves and transfer their term deposit funds to their accounts at the Bank of Greece," according to the decree issued Monday on a government website that said the "regulation [was] submitted due to extremely urgent and unforeseen needs."

A default on the country's 313 billion euros of obligations and a eurozone exit would be traumatic for the currency area and plunge Greece into a major crisis, European Central Bank (ECB) governing council member Christian Noyer told French newspaper Le Figaro in an interview published Monday.

Enzio Von Pfeil, investment strategist at Private Capital Limited, said in a Bloomberg TV interview that the Greek government's intention is to stay in the eurozone. "That's clearly what they want" he said.

Just enoughGreece's three-year yield jumped 193 basis points, or 1.93 percentage points, to 28.7 percent yesterday. Credit-default swaps suggested about an 81 percent chance of Greece being unable to repay its debt in five years, compared with about 67 percent at the start of March, according to CMA data.

Greek stocks were little changed today, with the benchmark Athens Stock Exchange falling 0.1 percent at the close. The new funds may be just enough for salaries and a 770 million-euro payment to the IMF due on May 12, the people said.

Dire situationThe move is a sign of the "dire liquidity situation for the Greek financial system as the government pools all liquidity available," said Gianluca Ziglio, executive director of fixed-income research at Sunrise Brokers LLP in London. The "next step may be forcing all public-sector entities, including public-sector companies, to do the same," he said.

Argentina's President Cristina Fernandez de Kirchner in 2008 nationalized about $24 billion of pension fund assets held in 10 private plans as her government struggled to find financing. The government justified the move as protecting retirement savings from the vagaries of the market. Then in 2010 and again in 2012, Fernandez rewrote the central bank's charter to allow the government to use foreign reserves for its own debt spending and payments. The Athens City Council and the Union of Municipalities and Communities in Greece will convene tomorrow to debate the order. George Papanikolaou, mayor of the Athens suburb of Glyfada, said that local officials have "a responsibility to serve our citizens and improve their living standards." Glyfada has cash reserves of about 16 million euros, he said in an interview.
Last Update: Apr 21, 2015 11:49 pm
RELATED TOPICS