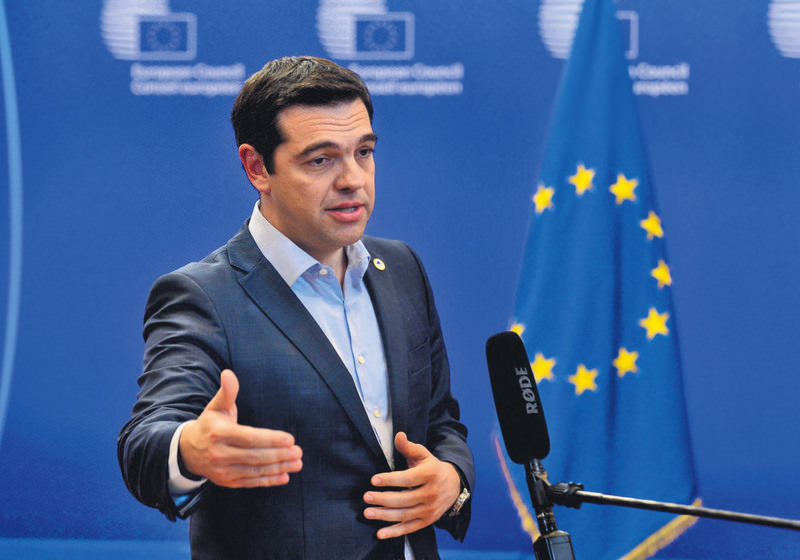 Greek Prime Minister Tsipras, after shaking up his negotiating team and sidelining his finance minister, said yesterday he was confident of an outline deal with international creditors within two weeks

Athens is weeks away from running out of cash, and talks with EU and IMF lenders on more aid have been deadlocked over their demands for Greece to implement reform measures, including pension cuts and labour market liberalisation.

In his first major television interview since being elected in January, Tsipras said he expected a deal with creditors by May 9, three days before a debt payment to the IMF of about 750 million euros ($815.5 million) falls due. He ruled out a default but stressed the priority was to pay wages and pensions.

Greek financial markets and the euro rallied on Monday on hopes that the relegation of Finance Minister Yanis Varoufakis, a Marxist academic prone to lecturing his euro zone peers, would improve prospects for an early deal to avoid a default that might lead to a Greek exit from the currency area.

Yet around half of investors expect Greece to leave the euro zone within the next 12 months, a survey published by German research group Sentix showed on Tuesday, highlighting market scepticism about politicians' pledges. The European Commission said talks on a cash-for-reform deal were making progress but gave no details of the substance.

Pressed on the options if no deal were found, Tsipras ruled out snap elections. But he said the government did not have the right to accept demands "outside our mandate", and a deal that required such terms would have to be put to Greeks in a referendum.

"But I am certain we will not reach that point. Despite the difficulties, the possibilities to win in the negotiations are large. We should not give in to panic moves. Whoever gets scared in this game loses." Tsipras said Greece was in the final stretch of negotiations despite differences on key issues like labour reform, pension cuts and a proposed value-added tax hike on tourist islands.

He said asset sales would be part of the concessions offered, including two major items - the sale of Piraeus port and the leasing of 14 regional airports.

He also said Greece was hoping for a 3 billion to 5 billion euro pre-payment of future profits if it struck a deal with Russia on Turkish Stream, a gas pipeline project.

On Monday, Tsipras appointed Deputy Foreign Minister Euclid Tsakalotos - one of his close allies and a soft-spoken economist liked by officials representing creditors - to head a new group handling negotiations with Greece's lenders. He also put economist George Chouliarakis, a close aide to Deputy Prime Minister Yannis Dragasakis, in charge of talks with the so-called Brussels group of the European Commission, the European Central Bank and the International Monetary Fund. In an effort to show that Athens is serious about giving lenders access to data, a new team was also set up to support EU and IMF officials gathering information in the Greek capital.

The moves effectively took the talks out of the hands of Varoufakis, although Tsipras defended the flamboyant intellectual, while acknowledging that the mood towards Greece among euro zone finance ministers was sour.

"There is a negative climate but I believe that this part of the negotiating game," Tsipras said. "Part of the negotiating game is to deconstruct the person who sits opposite you at the negotiation table." A senior European Central Bank policymaker, Bank of France governor Christian Noyer, said sidelining Varoufakis from the talks could be productive, but Athens still faced hard choices. "He's creating a number of tensions so that can certainly help the negotiations - but it doesn't change the substance at all. The Greek government ... must finally decide on serious reforms to put the economy back on track," Noyer said. In Brussels, a European Commission spokeswoman said the talks had gained pace since a confrontational meeting between Varoufakis and his euro zone peers in Riga last Friday. "Contacts have intensified and allowed further progress," spokeswoman Annika Breidthardt told a daily news briefing. "Talks are being made more productive and efficient."
Last Update: Apr 28, 2015 10:11 pm
RELATED TOPICS