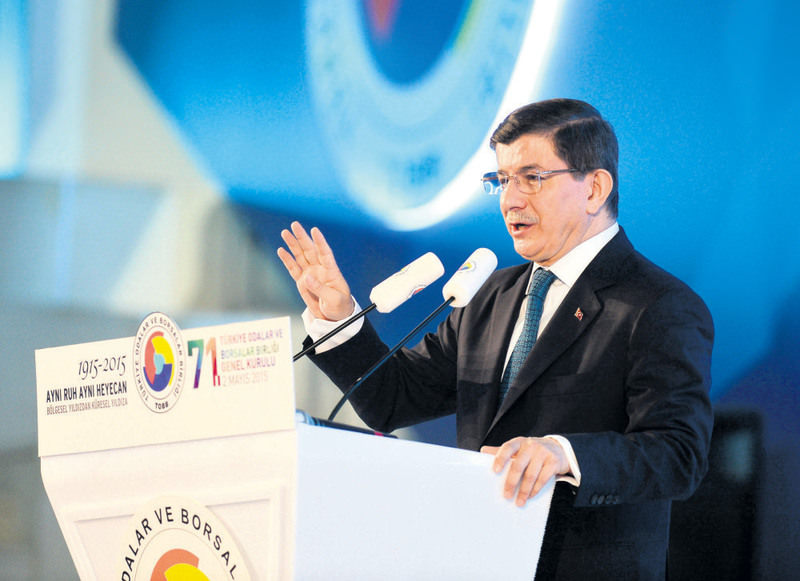 by Daily Sabah with AA May 03, 2015 12:00 am
Speaking at the General Assembly of the Turkish Union of Chambers and Commodity Exchanges, Prime Minister Ahmet Davutoğlu gave good news about the Transatlantic Trade and Investment Partnership (TTIP). "By renewing the Customs Union agreement with the European Union on May 11, we will have more say in transatlantic trade," Davutoğlu said.

The TTIP is a proposed free trade agreement between the European Union and the United States, and if the negotiations are successful, the TTIP has the potential to integrate two of the world's largest economies.

Turkey has been a party to a customs union with the EU since 1995, allowing goods into its borders. But because Turkey is not a member of the EU, it is excluded from the talks. Turkish officials argue that future free trade agreements signed by the EU with other countries, such as the U.S., would effectively open Turkey's market to exports from these states. But it would also effectively block Turkish exports from benefiting from tax advantages in those same states should Ankara not be a party to the free trade deals negotiated by the EU. Turkey, which has been trying to become a member of the TTIP for a long time, will gain a significant position with the new Customs Union agreement.

The prime minister also praised the Turkish business world, and said Turkey is one of the most powerful production centers in the region. He said that wherever Turkish entrepreneurs are investing, a Turkish ambassador will be assigned and Turkish Airlines will begin flights to the related region. "We will cross mountains that were deemed untraversable; we will cross straits that were deemed impassable. With the legacy entrusted to us from our fallen soldiers at the Battle of Gallipoli, we wish to become one of the 10 biggest economies in the world by 2023 and leave a bright future to the next generations," Davutoğlu said.

The capacity of the ports in Çandarlı, Filyons and Mersin will also be enhanced. Davutoğlu said on April 26, 1.338 planes landed in 24 hours at Istanbul Atatürk Airport and served 160,569 passengers, which is an important indicator of a developing economy.

He stressed that lights, energy and mobility are signs of a developing country and that Istanbul Atatürk Airport is one of the airports in the world that is greatly increasing its capacity. Therefore, a third airport with a capacity of 150 million, which will become the biggest airport in the world, is being built. "We have to be proud of this, as this is aimed at making Istanbul a global financial center and one of the central cities in the global economy," Davutoğlu added. He also highlighted that other projects such as the Marmaray, the Eurasia Tunnel and the three-story tunnel are all aimed at transforming Istanbul into one of the main centers of the global economy in the coming years, while also protecting the culture of Istanbul.

Last year, 1.4 million employment opportunities were offered in Turkey, and such breakthroughs in the last 12 years will continue to make Turkey one of the 10 biggest economies. Moreover, Davutoğlu said the main reason behind the success achieved in Turkey in the last 12 years is Turkey's human resources. He also noted that while employment rates have been dropping all around the world since the 2008 economic crisis, 6 million employment were created in Turkey last year that provided 1.4 million job opportunities.

Davutoğlu emphasized that despite stagnation, recession and the stopping of growth around the world, the government is determined to take the necessary steps to support the real economy. Underscoring that they have taken huge steps in terms of social policies that may even be deemed as revolutions, Davutoğlu added: "For example, the share of social policies in the total budget has increased from 32 percent to 65 percent. And now, the most important items in the budget are education and health." He also stressed that infant deaths have decreased from 3.1 percent to 0.8 percent and that life expectancy has increased from 72 years to 77 years.
Last Update: May 03, 2015 11:21 pm
RELATED TOPICS