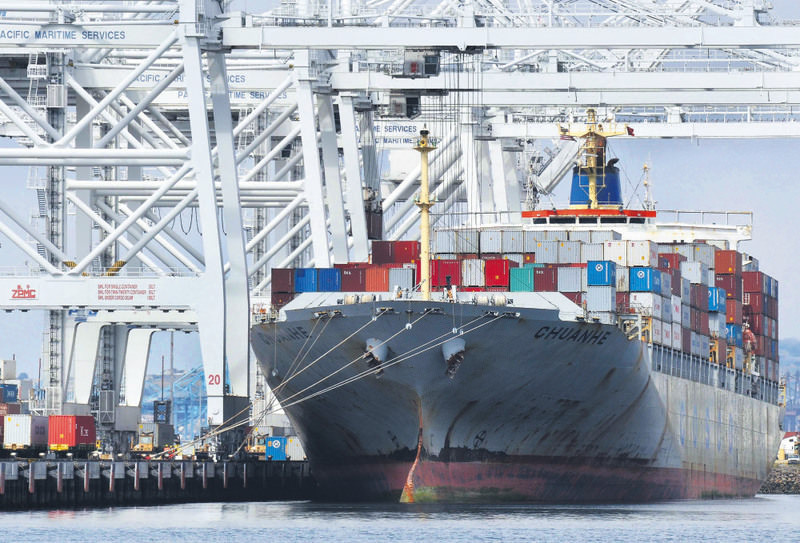 by Associated Press
May 05, 2015 12:00 am
The U.S. trade deficit in March jumped to the highest level in more than six years as a small increase in exports was swamped by a flood of imports from autos to cellphones. The deficit rose to $51.4 billion, the largest trade gap since October 2008 and more than 43 percent higher than the February imbalance, the Commerce Department reported Tuesday. Exports were up 0.9 percent to $187.8 billion, while imports increased 7.7 percent to $239.2 billion. The trade deficit is the short-fall between exports and imports.

Economists had expected the March deficit to expand, reflecting the resolution of labor disputes which had slowed shipments at West Coast ports. But the deficit was bigger than expected and will likely shrink an already anemic first quarter of economic growth. The government reported last week that the overall economy, as measured by the gross domestic product, grew a tiny 0.2 percent. A disappointing trade deficit was already estimated to have cut 1.25 percentage points from first quarter growth. But the March performance could send GDP into negative territory.

Economists are looking for a bounce back in growth in the current April-June quarter to around 2 percent, climbing to a 3 percent average in the second half of the year. Rising employment is expected to fuel stronger consumer spending, which should help offset sluggish export growth.

Exports have been hurt by an increase in the value of the dollar against other major currencies over the past year. A strong dollar makes U.S. products more expensive overseas while lowering the price of imported products and making them more competitive in the U.S. market.

For the first three months of this year, the trade deficit was 5.2 percent higher than the same period a year ago. A larger trade deficit acts as a drag on growth because it means more U.S. producers are losing sales to foreign competitors.

For March, the deficit with China surged 38.7 percent to $31.2 billion. The U.S. trade deficit with China is the largest for any country and is on track to set another record this year. The jump in imports in March reflected increases shipments of foreign-made industrial machinery, autos, cell phones, clothing and furniture. Imports of petroleum products declined 6.6 percent to $15.4 billion, the lowest level for imports since September 2004. U.S. exports of petroleum dropped 7 percent to $7.7 billion. Both declines reflected the big drop in oil prices over the last year.

President Barack Obama has been pushing the benefits of free trade in an effort to convince Congress to pass the legislation he needs to complete a sweeping trade agreement with 11 other nations, an agreement known as the Trans-Pacific Partnership.

The legislation, approved by committees in both the Senate and the House, would force Congress to consider the trade agreement under fast-track rules. That means an up-or-down vote with no amendments from Congress. The fast-track legislation is expected to win Senate approval but passage in the House will be more challenging. Democrats in both chambers are demanding that the administration negotiate stronger labor and environmental standards and ban currency manipulation, with some believing that China is doing so to gain trade advantages.
Last Update: May 05, 2015 7:44 pm