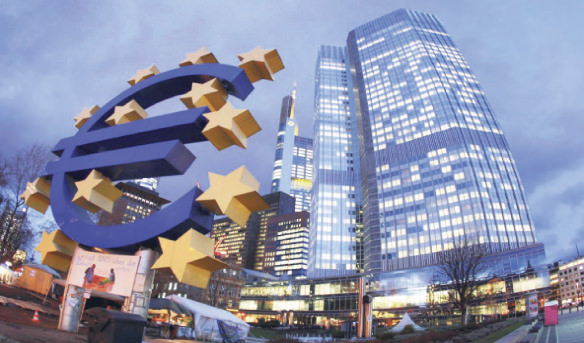 With optimism building that the U.S. is already recovering from a poor start to the year, focus will shift this week to reports that may show the eurozone is finally shaking off five years of lethargy

The 19-member currency union has been a millstone around the global economy's neck, ever since the financial crisis spawned a sovereign debt crisis particular to Europe. China's economy is no longer driving growth and other emerging markets like Brazil are grappling with disappointing performance in the run-up to what most expect will be the first U.S. interest rate hike in nearly a decade later this year. So it is all the more crucial for more than just its citizens suffering from years of high unemployment and feeble or no growth that Europe is able to pick up some of the slack.

Eurogroup finance ministers will meet today to discuss once more Greece's sclerotic progress in implementing economic reforms in exchange for bailout funds as it gets dangerously close to running out of cash. But policymakers have already played down hopes of major progress early next week, which leaves the spotlight on the first read of how quickly the eurozone and its component economies performed at the start of the year.

For the first time in many years, it seems clear that the eurozone performed not only better, but far better than the U.S., which almost certainly suffered a mild economic contraction in January-March. Eurozone growth is forecast at 0.5 percent, according to a Reuters poll of economists, which would even put it ahead of Britain, which consistently has been leading the biggest economies in Europe, not only in growth but employment.

Given that the European Central Bank only just began in March a 60-billion-euro-a-month bond purchase program of mainly sovereign debt, such growth data certainly would raise even louder cries that perhaps stimulus is not even required.

Germany, Europe's largest economy and the one that was most opposed to ECB bond purchases, is forecast to have grown 0.5 percent. France, which has been the laggard among the big economies, is expected to grow 0.4 percent. Even Italy is expected to chalk up 0.2 percent growth.

One thing that analysts seem in agreement on is that apart from Greece's seemingly endless fiscal troubles, many positive forces have lined up behind the eurozone in addition to thelaunch of massive amounts of monetary stimulus. "This recovery is supported by five underlying drivers: (1) stronger external demand; (2) easier domestic financial conditions; (3) an end to fiscal austerity; (4) a weaker euro exchange rate; and (5) lower oil prices," wrote Huw Pill at Goldman Sachs.

The Bank of England also will announce its interest rate policy this week and publish its latest Inflation Report, just days after Prime Minister David Cameron swept back to power in national elections with a narrow majority that took political pundits and much of the electorate by surprise.But no change in policy is expected. If anything, a platform of rapid fiscal retrenchment planned by the Conservative government has analysts now predicting that record low interest rates may stay near zero well into next year to offset the pain. "A Tory victory means that the economy will have to endure a fairly aggressive renewal of the fiscal squeeze," noted Vicky Redwood at independent consultancy Capital Economics. "Even if the cuts are achieved, at least interest rates will stay lower for longer to help compensate."

Across the Atlantic, key releases on retail sales data and on U.S. consumer confidence are both expected to show modest improvement following a solid set of jobs data published on Friday that still showed no serious wage pressures. The Fed remains on course to raise interest rates this year, but a risk it pulls the trigger at the June meeting has now faded for even the most optimistic on the economy's prospects.

"This (jobs) report will keep the Fed on track for tightening this year but it will not help the case for moving earlier than September," wrote Jim O'Sullivan at High Frequency Economics, the most accurate U.S. forecaster in Reuters polls last year.