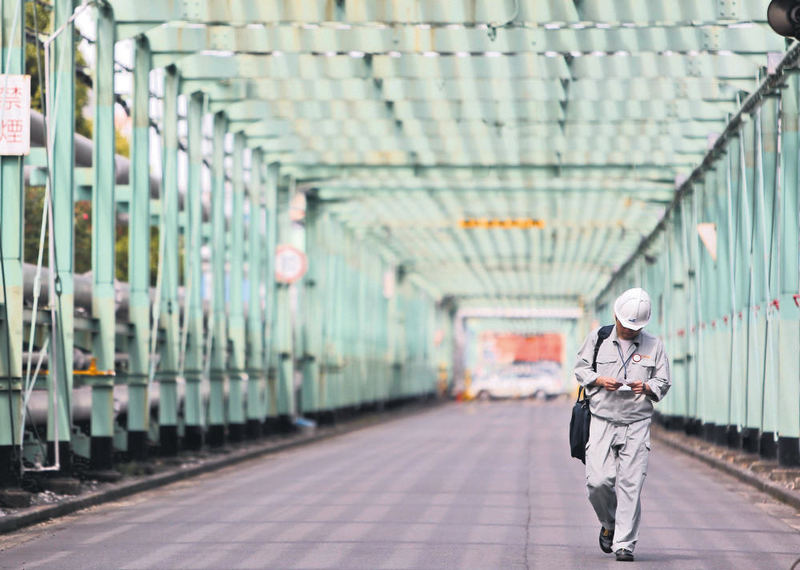 by Associated Press May 15, 2015 12:00 am
A plunge in energy-related drilling and sluggish manufacturing sent U.S. industrial output down for a fifth straight month in April. Overall industrial production slid 0.3 percent in April after a drop of the same size in March, the Federal Reserve said Friday. The figures suggest that weakness in manufacturing and mining is weighing heavily on the economy.

Oil and gas well drilling activity plunged 14.5 percent last month, its fourth straight double-digit decline. Last year's steep decline in oil prices, from about $110 a barrel to $50 in January, has forced energy firms to rapidly scale back operations. Manufacturing output was unchanged after rising 0.3 percent in March. Utility production fell 1.3 percent, as Americans used less heat but haven't yet cranked up the air conditioning. The cutbacks by energy companies likely contributed to a drop in the production of industrial machinery, which fell 0.9 percent, its second straight decline. The strong dollar also likely held back machinery sales, because it makes goods more expensive overseas. Companies like Caterpillar are exporting fewer trucks, bulldozers and other industrial machines. The data "reflects the continued headwinds the U.S. manufacturing sector faces from a strong dollar, lower oil prices and softness in international demand," Jesse Hurwitz, an economist at Barclays, said. Auto production rose 1.3 percent, a solid increase but down from March's 4.3 percent gain. A separate report Friday showed that U.S. manufacturers are slowly adjusting to the challenges of a strong dollar and low oil prices.

The Federal Reserve Bank of New York said that its Empire State manufacturing index rose to a plus 3.09 reading in May, up from a negative 1.19 reading in April. The index was lifted by the first increase in new orders in four months. The Empire State index provides an early look at U.S. manufacturing each month, and May's reading is a sign that manufacturing could be starting to recover.

In the first three months of the year, industrial production fell at a 0.7 percent annual rate, the worst quarterly showing since the second quarter of 2009 when the economy was mired in recession. Manufacturing output also fell 1 percent in the first quarter.

In addition to less drilling by energy firms, the sharp fall in new wells has led to weaker demand for steel pipe and other manufactured goods such as rail cars and transport oil. Those factors contributed to a very weak showing for the economy in the first three months of the year, when most analysts expect that it contracted by as much as 1 percent at an annual rate.

Still, economists think manufacturing should recover later this year once the impact of oil and gas cutbacks have faded. The dollar's value has leveled off, so that drag should also fade. Yet few analysts see manufacturing providing much of a boost to the economy this year.
Last Update: May 15, 2015 8:45 pm
RELATED TOPICS