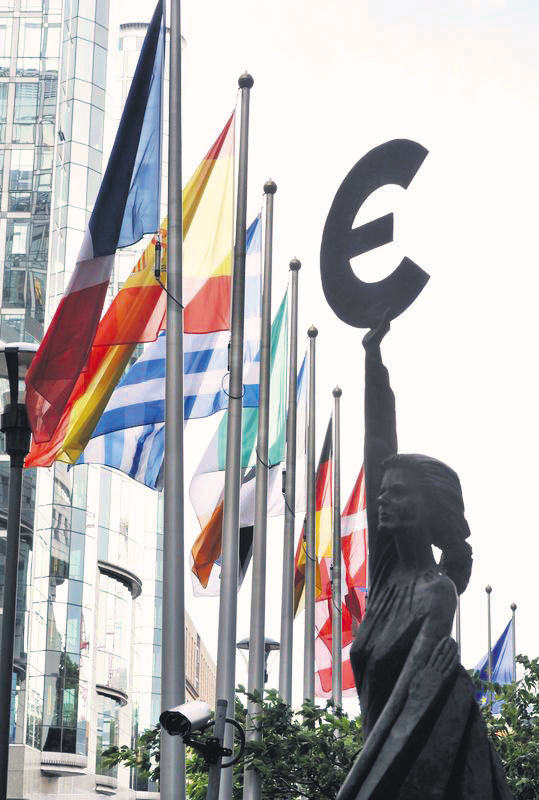 by Associated Press May 20, 2015 12:00 am
Europe's economy has been down so long, even a bit of growth looks like recovery. Markets were cheered, to be sure, by last week's figure showing an improvement in the eurozone's growth to 0.4 percent in the first three months of the year. Cheap oil helped, as has the launch of a 1.1 trillion monetary stimulus by the European Central Bank. But that can't mask the currency union's long-term sluggishness. The fact remains: The 19-country eurozone economy is still smaller than it was before the global financial crisis that started in 2007-2008. The eurozone lags almost four years behind the United States, which recovered the output lost during the global financial crisis in late 2011. It could take another year before Europe regains pre-crisis levels. That's a good eight years after the crisis.

Gross domestic output all the spending on goods and services in the economy was 2.434 trillion euros ($2.72 trillion) in the first three months of the year. That's below the 2.472 trillion euros from the first quarter of 2008, by about 1.5 percent, once adjusted for inflation.

Mark Zandi, chief economist at Moody's Analytics, thinks it will be the first quarter of 2016 before the 2008 level is breached. Reducing the current unemployment rate of 11.3 percent will take even longer and reaching full employment could take another four or five years. "By that measure, it will truly be more than a lost decade a decade and some," said Zandi. "Very disappointing." Unemployment will be one of the themes of an elite conference the ECB will hold Thursday through Saturday. Here are some of the reasons why Europe's recovery has been so slow in coming.

Some government policies helped prolong the agony. As eurozone countries such as Ireland, Greece, Portugal, Spain and Cyprus got into trouble with too much debt, they received financial aid from the other countries led by Germany. Just one thing: the condition for bailout loans was austerity, or spending cutbacks and tax increases to avoid further borrowing. Austerity weighed heavily on growth, as government workers lost salary and retirees saw smaller pension payments. Some governments have eased up, realizing they may have overdone it. Zandi predicts fiscal policy will trim 0.4 percentage points off growth this year and 0.2 points next year.

Don't bank on it

While government money was tight, the European Central Bank loosened up, slashing interest rates and handing cheap loans to banks. Problem was, the troubled banks in several countries were not up to lending. So they were not passing on the ECB's stimulus cash, especially in troubled Spain and Italy. Profitable companies couldn't get credit to expand.

Marco Valli, chief eurozone economist at UniCredit, said this combined with austerity to hurt the economy even more. "You had first of all the policy response, which basically consisted of strong fiscal consolidation in crisis countries, which obviously exacerbated the pace of output decline," he said. "Then you had the poor function for the transmission mechanism of monetary policy until very recently, which harmed growth prospects in the most vulnerable part of the eurozone."

Tiny Greece has the recent headlines as it tries to avoid defaulting on debt. But the real ball and chain on growth is much bigger Italy.

The economy there remains 10 percent smaller than before the crisis. In fact, Italy has not shown sustained, robust growth since it joined the euro in 1999. One reason: it can no longer devalue its own currency. In past times, a falling national currency, the lira, would give industrial firms an export boost.

Worse, successive governments have made only halting attempts to reduce legal protections that let workers challenge layoffs and, if successful, force their rehiring. Cumbersome bureaucracy and corruption also remain issues.

Italy is the third largest of the eurozone economies, behind France and Germany. Germany's doing well. But when an economy as big as Italy's is that bad, it drags down the overall growth figure quite a bit.
Last Update: May 20, 2015 10:08 pm
RELATED TOPICS