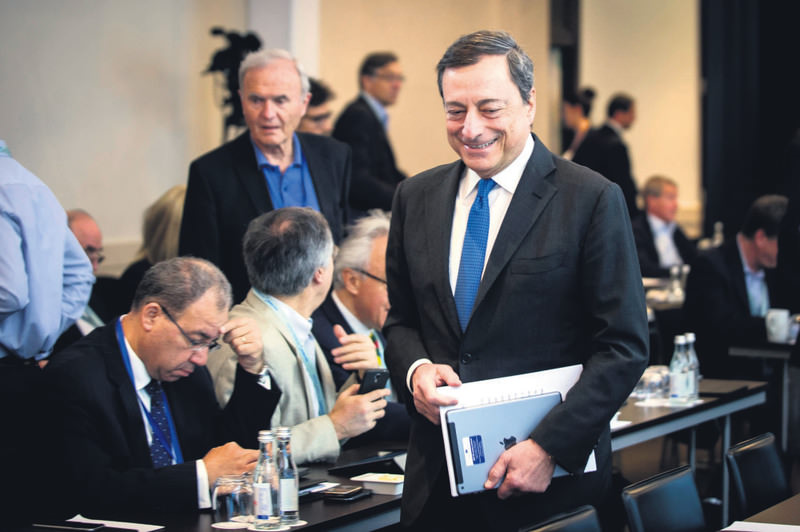 by Associated Press May 22, 2015 12:00 am
European Central Bank head Mario Draghi says governments that share the euro currency shouldn't wait for better times to push through reforms that would boost sluggish growth. Draghi said tough measures to clear away bureaucracy and make hiring and firing more flexible are needed quickly to energize the economy. He rejected arguments that looser hiring and firing rules only work over the long term and could hurt the hesitant recovery that is taking hold. He said that "the sooner they take place, the better." Draghi spoke Friday at an ECB conference in Sintra, Portugal, where economists are discussing ways to lower unemployment. The jobless rate is 11.3 percent for the 19 European Union member countries that use the euro, and 50 percent for young people in Spain and Greece. Some economists and policy makers argue that making it easier to hire and fire will make workers fearful and increase their precautionary savings. Therefore, they say, reforms should wait for better times. Draghi argued the opposite, that "being in the early phases of a cyclical recovery is not a reason to postpone structural reforms; it is in fact an opportunity to accelerate them." He said countries such as Spain that have started implementing such reforms are already showing strong growth as they emerge from the eurozone's crisis over high government debt and sluggish growth.

The eurozone is still trying to get its economy going, some six years after the debt crisis started in 2009, when Greece revealed its deficit was out of control. Growth rose by 0.4 percent in the first quarter.

Draghi said Europe's slow progress meant that there is a lot of untapped potential that would come on line quickly if governments act. Reforms could include reducing the paperwork and permissions needed to start a business, as well as retraining and job search support for the long-term unemployed. "Since many economies are distant from the frontier of best practice in at least some policy areas, the gains from structural reforms are easier to achieve and the potential magnitude of such gains is greater," he said. He cited research suggesting that determined efforts to improve the business climate in Europe would boost the economy by 11 percent over 10 years for a given country, while the more flexible U.S. would gain only 5 percent. Governments have taken different approaches. Germany, the biggest eurozone member, shook up hiring and employment practices a decade ago, and now enjoys low unemployment. France and Italy, the No. 2 and 3 economies, have been much slower to make changes against labor union resistance, while Spain has taken some steps after a collapsed real estate bubble devastated its economy.
Last Update: May 22, 2015 11:09 pm
RELATED TOPICS