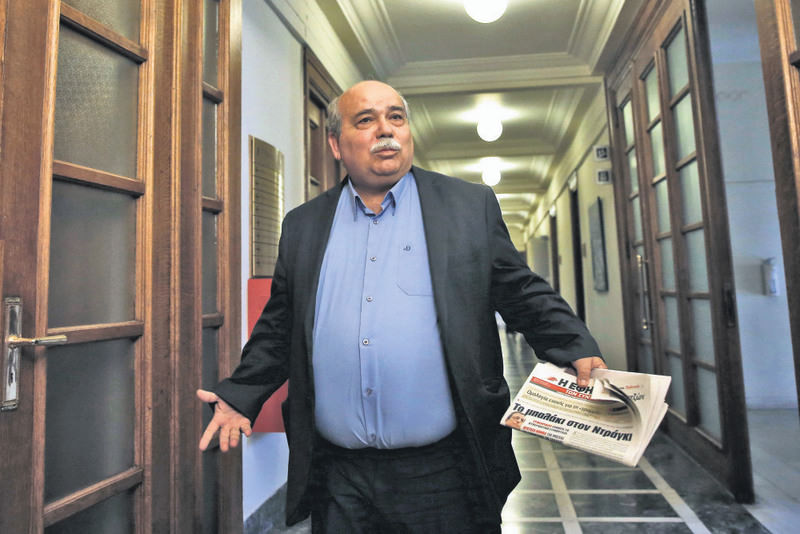 Greek Minister of Interior and Administrative Reconstruction Nikos Voutsis.
by May 25, 2015 12:00 am

Eurozone finance ministers and the IMF failed to reach a deal on debt repayments after four months of talks. A Greek government minister said yesterday that Greece will not be able to pay next month's installment

Greece cannot make debt repayments to the International Monetary Fund (IMF) next month unless it achieves a deal with creditors, its interior minister said yesterday, the most explicit remarks yet from Athens about the likelihood of default if talks fail. Shut out of bond markets and with bailout aid locked, cash-strapped Athens has been scraping state coffers to meet debt obligations and to pay wages and pensions.

After four months of talks with its eurozone partners and the IMF, the country's leftist-led government is still scrambling for a deal that could release up to 7.2 billion euros ($7.9 billion) in remaining aid to avert bankruptcy. "The four installments for the IMF in June are 1.6 billion euros ($1.8 billion). This money will not be given and is not there to be given," Interior Minister Nikos Voutsis told Greek Mega TV's weekend show. Asked about his concern over a credit event if Athens misses a payment, he said: "We are not seeking this, we don't want it, it is not our strategy. Things have matured for a deal of logic." "We are discussing, based on our contained optimism, that there will be a strong agreement (with lenders) so that the country will be able to breathe. This is the bet," Voutsis said.

Previously, the Athens government has said it is in danger of running out of money soon without a deal, but has insisted it still plans to make all upcoming payments. The government is under pressure to agree to more cuts and reforms to secure the funding, but opposes measures which it says make the situation worse by preventing recovery from one of the deepest recessions in modern times.

Voutsis said the government was determined to fight against the lenders' strategy of "asphyxiation". "This policy of extreme austerity and unemployment in Greece must be hit," he said. "We will not escape from this fight."

In an effort to placate the hard left faction of his Syriza party, Greek Prime Minister Alexis Tsipras said on Saturday the government was on a final stretch towards a deal but would not accept "humiliating terms".

Finance Minister Yanis Varoufakis said Greece had made "enormous strides" at reaching a deal with its lenders to avert bankruptcy but it was now up to the institutions to do their bit. "We have met them three quarters of the way, they need to meet us one quarter of the way," he told Britain's BBC on Sunday. Varoufakis also said it would be "catastrophic" if Greece left the euro, predicting it would be "the beginning of the end of the common currency project". He said in the last four months Athens managed to pay public sector salaries, pensions and dues to the IMF by extracting 14 percent of national output, doing "remarkably well" for an economy that doesn't have access to money markets. "At some point we will not be able to do it and at some point we are going obviously to have to make this choice that no minister of finance should ever have to make," Varoufakis said.