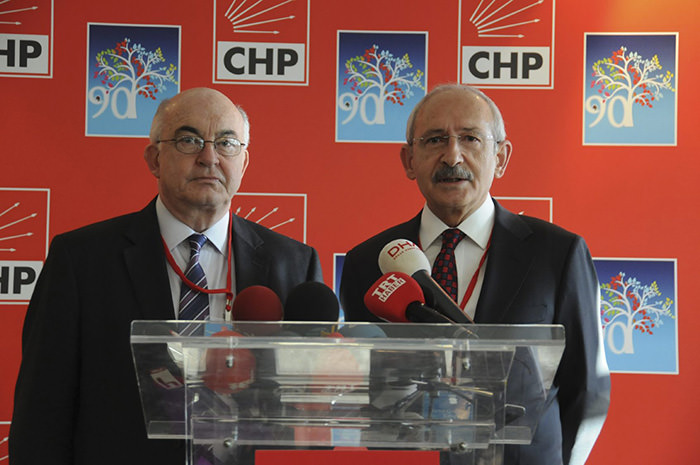 Kemal Derviu015f (on the left) with CHP Chairman Kemal Ku0131lu0131u00e7darou011flu | Sabah Photo
by Daily Sabah May 26, 2015 12:00 am
Former Economy Minister Kemal Derviş said there is no economic crisis in Turkey and there will not be a crisis any time soon, pointing to the third airport project in Istanbul as a necessary step. The main opposition party and most vocal opponent to mega projects like the third airport, Republican People's Party (CHP), has announced if they came to power after the elections on June 7, Derviş will be in charge of the economy despite him not being a deputy candidate.

On a television program, Derviş – known for his solutions to Turkey's 2001 economic crisis – gave some striking insight about the CHP. Reinforcing the CHP's opposition to mega projects, Derviş said the CHP had been rejecting many mega projects such as the third Istanbul airport without any real basis to such opposition.

When asked about the CHP's megacity project, which is planned to turn Turkey into a hub for international trade, Derviş said he has doubts, but believes it is a logical project. However, without the proper implementation plan in place, the project would not work or achieve the results for which it aims. He also underscored that while the CHP opposes the third Istanbul airport, the CHP's megacity project is directly related to the airport, and added that he does not understand the CHP's perspective in this respect.

Derviş said he believes Istanbul definitely needs a third airport and he is proud of all the achievements of Turkish Airlines, which is currently one of the best airlines in the world. He also underscored the importance of benefiting from the geopolitical location of Turkey, and said no one in their right mind would oppose the third airport project. However, the CHP, which has been the main opposition party for years now, has made a habit of opposing such projects.

Derviş, who is a highly-acclaimed economist, also said: "There is no economic crisis at the moment and there won't be any in the near future," despite claims by the Gülen Movement, the CHP and other opposition parties. He added that while his position may be politically risky, there is no similar crisis to the one suffered in 2001, nor does he believe a financial crisis will occur in the near future.
Last Update: May 27, 2015 3:40 pm
RELATED TOPICS