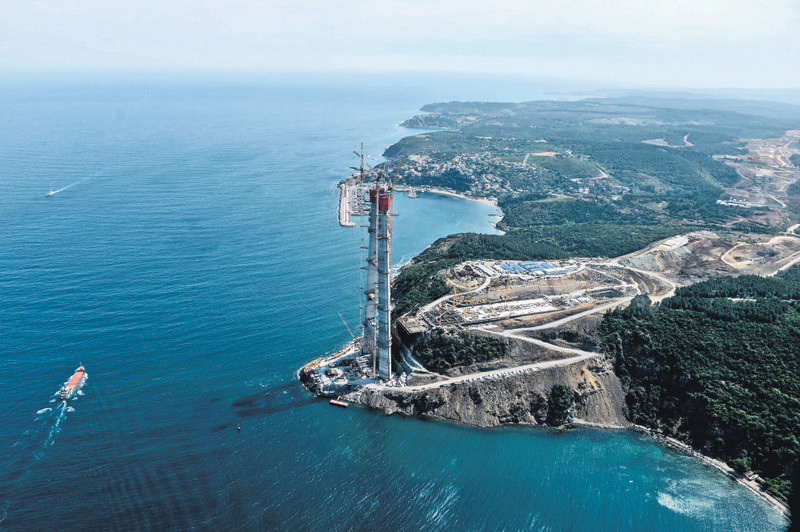 The plan announced by the PM Davutoğlu on Monday for the private sector to build Turkey’s first domestically-produced car is just a part of the more comprehensive economic overhaul aiming for the country to continue to grow into high-income status, analysts say

In the past few weeks the government outlined its economic master plan that aims to provide the economy with the momentum to propel it from the current high-medium income category into the high income category over the next decade. Prime Minister Ahmet Davutoğlu's announcement yesterday that Turkey would begin producing its first domestic automobile next year is seen as part of the major overhaul of the economy, which includes major infrastructure projects in addition to a countrywide high-speed railway system, the third airport in Istanbul and the third bridge over the Bosporus, projects that will ensure the country will become a major energy hub, as well as structural reforms, domestically produced aircraft and state support for innovation in technology and manufacturing. The ruling Justice and Development Party (AK Party) government also intends to demonstrate that the economic leadership responsible for the economic performance of the past decade, which allowed Turkey to move from the lower-middle to the high-middle income bracket, will also be involved in the future to succeed in making Turkey one of the largest 10 economies in the world by 2023, the centenary of the Republic.

Ali Babacan, the deputy prime minister in charge of the economy, is not in the running in the coming parliamentary elections, but will be involved in the economic decision-making mechanisms within the government. Finance Minister Mehmet Şimşek is expected to continue in the same capacity in the next government. The party has committed to achieve a comprehensive economic plan to rescue the country from the middle-income trap it faces and regain the momentum of growth by realizing the actual potential of Turkey.

Yesterday, Davutoğlu announced that Turkey's first domestically produced car will be ready with a prototype in August and the first batch of vehicles will begin production in 2016. "All preparations have been finalized and we will sign the papers this week," Davutoğlu said at an election rally in Kırıkkale. The car is expected to be an electric car with an increased range and will be a private investment according to Science, Industry and Technology Minister Fikri Işık. Further details will be announced this week.

Along with the new industry projects, the AK Party has also been working on infrastructure projects like new airports, undersea tunnels, high-speed train lines and a third bridge in Istanbul. In the last 10 days, two new airports, which are crucial for the country due to their locations, became operational. Europe's first airport built on an artificial island, situated between the northern provinces of Ordu and Giresun, will serve about 2 million passengers annually. Turkey's 55th airport began service last week in the district of Yüksekova in the southeastern border province of Hakkari, which suffered from terrorist attacks for years. The AK Party is also preparing five new airport projects to be built in the provinces of Rize-Artvin, Karaman, Yozgat, Edirne and the western side of Antalya, which will be the third airport in Turkey's main center of tourism, with the aim of ensuring that there is an "airport present every 100 kilometers."

Sustaining a healthy financial system is also a key factor for economic growth. Recently, Islamic banking has become one of the essential issues on the AK Party's agenda as part of its plan to turn Istanbul into a major financial center. Ziraat Participation Bank officially began operating as Turkey's first state-owned participation bank on Friday with $300 million worth of capital. Babacan announced that the other state-owned banks will follow Ziraat and Vakıf Bank and Halk Bank will launch their Islamic units soon.

As a resource-poor country, Turkey has always had to find ways to cover its energy demand. Building a nuclear power plant, renewable energy projects and providing energy supply security were also on the agenda of the government. The Akkuyu nuclear power plant plans to start electricity production in 2019. The government aims to increase the share of local and renewable resources in electricity production to 30 percent by 2023. On the other hand, Iraqi oil has opened to global markets through Turkey and new natural gas pipeline projects are ongoing. The Trans-Anatolian Pipeline Project will carry Azeri natural gas to Europe through Turkey and it is planned that the Turkish Stream will transfer Russian natural gas to Europe across the Turkish-Greek border.
Last Update: Jun 01, 2015 11:03 pm
RELATED TOPICS