US economy contracts as another recession looms 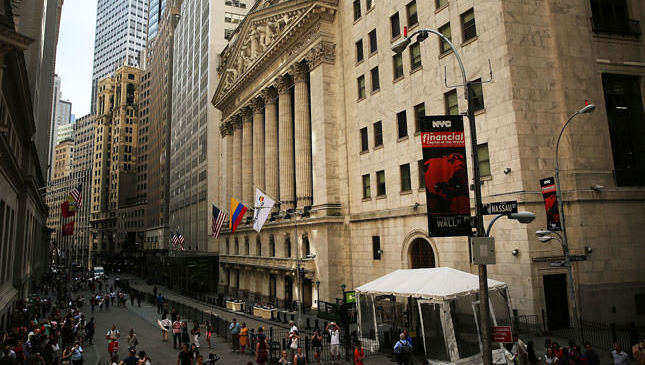 Gross Domestic Product in the US has contracted, business spending has plunged and consumer spending has lagged despite windfall from lower oil prices

The U.S. economy has veered towards recession in the first quarter, as a slew of negative economic data cast gloom on the country's nascent economic recovery, analysts say.

The U.S. saw negative growth in the first quarter, as Gross Domestic Product fell to negative 0.7 percent from a previous estimate of 0.2 percent growth, the Commerce Department reported Friday.

The report cited weak private investment, increased imports, and exports hit by the strong U.S. dollar as factors in the slowdown.

"GDP looks even weaker than before, but there are special factors," wrote Jim O'Sullivan, chief U.S. economist at High Frequency Economics, in a note published Friday.

In fact, several economists cited the cold winter as a special, temporary factor. "But consumers are not spending the windfall money provided by low energy prices," commented Charles Dumas, an economist with Lombard Street Research, in a note published on May 19. Consumer spending accounts for two-thirds of the U.S. GDP.

"The question boils down to whether – and if so when – the bounce in the personal savings rate will unwind. It jumped from 4.6 percent in the fourth quarter of 2014 to 5.5 percent in the first quarter of 2015, absorbing the bulk of the 1 percent gain in real disposable income attributable to cheaper oil. Some of this shift clearly represented the 'permanent income' effect – consumers not spending a windfall until they feel sure it will last," Dumas wrote.

Consumer spending dropped 0.2 percent in January after falling 0.3 percent in December, according to Commerce Department statistics.

Business spending is also down. The Commerce Department said on May 24 that non-defense capital goods orders, excluding aircraft, dropped 1.4 percent last month after a downwardly revised 0.1 percent dip in January.

And the U.S. industrial production decreased 0.3 percent in April for its fifth consecutive monthly loss, the Federal Reserve reported on May 16.

"It should come as no surprise that the manufacturing sector is having a rough go since currency appreciation and commodity prices caused domestic firms to halt some production and cut margins; the question is only how long it lasts," said Jay Morelock, an economist at FTN Financial, in a recent note.

Also, exports fell in the first quarter: exports of goods and services decreased 7.6 percent after an increase of 4.5 percent in the last quarter of 2014. Economists attributed the drop to the stronger dollar, as well as to weaker foreign markets.

Despite the gathering gloom, Federal Reserve Federal Reserve chairwoman Janet Yellen said in a speech on May 22 that an interest rate rise would happen this year. "If the economy continues to improve as I expect, I think it will be appropriate at some point this year to take the initial step to raise the federal funds rate target and begin the process of normalizing monetary policy," Yellen said.

She shrugged off the bad data, saying that the Fed expects the U.S. economy to strengthen. Nonetheless, she has linked such a rate hike to the inflation outlook, as well as improved economic data.

Core inflation is at 1.8 percent, close to the Fed's target of 2 percent. But, amid the gathering gloom of other data, a rate hike should not be expected before the fall, analysts say.