US expert: IMF to reward Greece if it withdraws from Turkish Stream 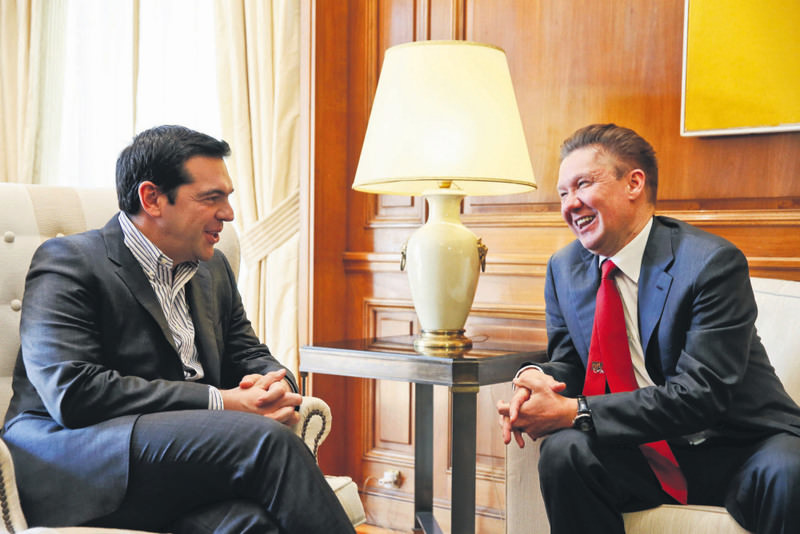 Greek PM Tsipras (L) welcomes Russian Gazprom CEO Miller at his office in Athens April 21. During talks in Moscow, Tsipras expressed interest in Greece's participation in a pipeline that would carry Russian gas to Europe through its territory.
by Şeyma Eraz Jun 04, 2015 12:00 am

The political conflict between the U.S. and Russia is now forcing countries to choose sides on new energy projects. Gal Luft, a senior adviser to the United States Energy Security Council, said if Greece withdraws from the Turkish Stream project, which is planned to transfer Russian natural gas to Europe via the Turkish-Greek border, the U.S. will expect the International Monetary Fund (IMF) to reward Greece.

Speaking to Anadolu Agency (AA), Luft said the U.S. has not showed its influence on the IMF for Greece in terms of its own energy policies, and said in case Greece withdraws from the Turkish Stream Project, which will benefit Moscow, the U.S. will expect the IMF to reward Greece. The statement is meaningful, since Greece's new government has been in talks for four months on what reforms it should make to receive the final bailout installment of 7.2 billion euros from fellow eurozone states and the IMF. Athens needs the funds to be able to repay an IMF loan installment of more than 300 million euros that is due today. The installment is just one of four due to the IMF in June, all repayments of loans that are part of Greece's 240 billion euro bailout that began five years ago.

After the cancellation of the South Stream project, which is supposed to deliver Russian gas to Europe via Bulgaria, Turkey and Greece have become the new possible partners of a new pipeline. The main reason behind the cancellation of the South Stream was Bulgaria's unwillingness according to Russian authorities. The Bulgarian government blamed the European Union, saying they lost the profit that will be gained from the pipeline because of the sanctions levied on Russia due to the Ukraine conflict.

On the other hand, political conflicts did not stop Turkey and Greece from refraining from economic benefits. During Greek Prime Minister Alexis Tsipras official visit to Moscow in April, he and Russian President Vladimir Putin announced they agreed to build a new pipeline, which will extend from Russia to Turkey and then to Europe from the Turkish-Greek border. "The new route will provide for European fuel needs and allow Greece to become one of the main power distribution centers on the continent, which could help attract significant investment into the Greek economy," Putin said at a joint press conference with Tsipras.

The pressure seems to have found its new target after Bulgaria. Luft said Greece, which relies on the flexibility and good will of the IMF, would be exposed to much more pressure from the U.S. in the short term. He added that the U.S. would focus on completing the Trans Adriatic Pipeline (TAP) project, which will carry Azeri natural gas to Europe via Greece instead of the Turkish Stream Project, which is in Russia's interests.

Slawomir Raszewski, a research associate for the London-based European Centre for Energy and Resource Security, stressed finishing the TAP is more feasible compared to the Turkish Stream Project. Emphasizing that the TAP is a project that is currently being completed and it has a specific completion date, Raszewski said the details of the Turkish Stream, which is a political project, has yet to become clearer.

Speaking to Daily Sabah, economist Cemil Ertem said the Southern Gas Corridor, which is an initiative of the European Commission (EC) addressing gas supply from the Caspian and Middle Eastern regions to Europe, is the project that should be focused on. Since energy supply security is the main concern of the talks, the Southern Gas Corridor can be the safest way to deliver natural gas to Europe from the Caspian and Middle Eastern regions, including Iran.

Turkey and Russia is currently examining the possible routes of the Turkish Stream. Now, however, eyes will be on Greece after Luft's statements and if the country will retreat from the project.

The EU members Slovakia, Hungary, Romania and Bulgaria announced they have offered a common project to Russia regarding the Turkish Stream. Slovakian Prime Minister Robert Fico, who met Putin and Russian Prime Minister Dmitry Medvedev in Moscow during his official visit, said the four countries are interested in the Turkish Stream project, which will be implemented in 2016. Speaking to Russian news agency Sputnik, Fico said they are not expecting Ukraine to remove itself from the transit system. However, he said Russia and Ukraine's responsibility in this respect is to force them to look for alternatives.

Iranian gas to reach Europe through the Turkish Stream

Iranian National Gas Company International Affairs Manager Azizullah Ramezani announced that, after the international sanctions applied to Iran are nullified, Iran might consider delivering its natural gas to Europe through the Turkish Stream, as suggested by Russia during the Natural Gas Congress that took place in Paris. He added that a common agreement might be reached to deliver gas to Europe with Russia, and stressed that while official negotiations have not taken place regarding the matter, Iran believes it may be a good idea to consider this option.