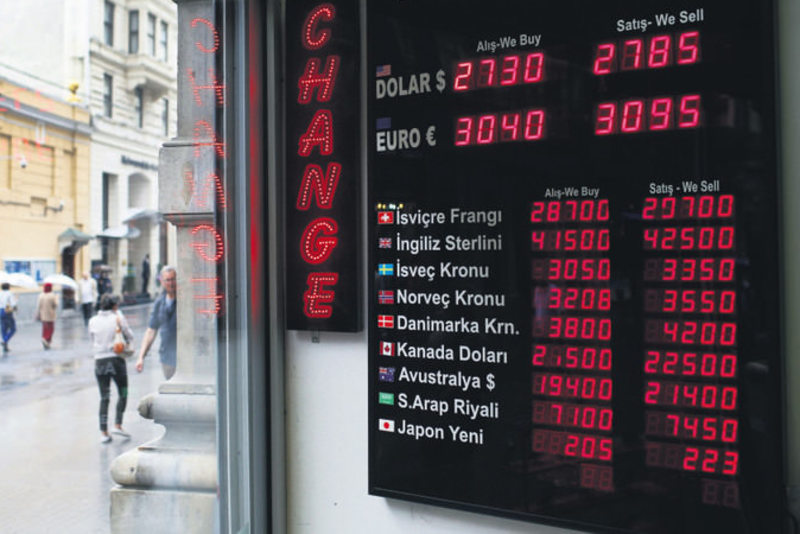 A currency exchange office in Istanbul, Monday, June 8. The Turkish currency yesterday dropped to a record low against the dollar over political uncertainty, trading at TL 2.8 to the dollar.
by Şeyma Eraz Jun 08, 2015 12:00 am

The Turkish lira reached an all-time low and the markets were down by more than 5 percent. Sunday's election results caused market fears since a single-party government is impossible

While the markets were expecting a single-party government after the election period, Sunday's election results had a shocking effect on the markets. The ruling Justice and Development Party (AK Party) was expected to maintain its government according to the election polls, which gave strength to the markets. Although the AK Party was the winner of the elections by taking 40.8 percent of the votes, it lost seats in Parliament and will not be able to establish a single-party government. The markets on Monday appeared to be disappointed by the results. While the election results signalled a coalition government, the stock exchange markets lost value and the dollar reached a record high against the Turkish lira.

After the election results showed that establishing a majority government was not possible, the lira reached an all-time low exceeding 2.95 in the currency basket. The ruling AK Party won 40.8 percent of the vote, while the Peoples' Democratic Party (HDP) won 13.1 percent, passing the 10-percent threshold of the national vote needed to win seats in Parliament. According to the unofficial results of the general elections, the single party period ended after 13 years and the first reaction came when the lira lost about 5 percent of its value compared to Friday's close.

In the first session of Borsa Istanbul, the BIST 100 index decreased by 5.067,67 compared to the closure of the previous session and closed at 76.875,75. The shares traded on the stock market decreased by around 6.18 percent on average, and the total transaction volume was around TL 2.3 billion ($840,000). The banking index dropped by 8.19 percent and the holding index by 4.68 percent in the first session. All sector indexes except for the mining sector, which increased by 8.44 percent, decreased in the first session. While the BIST 100 index increased to 77.512,00 with the reaction purchases, it was not able to remain above the 77.000 point level.

Speaking to Daily Sabah, economist Burak Arzova said that the value lost on the Turkish lira and the decrease in the markets will be temporary due to Turkey's strong financial system and economic dynamics. "Turkey will have a government eventually, and the markets will get back to normal," said Arzova. He also said that Turkey has the potential to grow 3 percent on average in the worst case. However, the main concern now is the structural reforms, which are needed to realize a higher growth rate and push Turkey into the high-income bracket from the high-middle bracket. "It is not possible for a coalition government to realize structural reforms, since they are risky. No one can be sure about the result of a reform. Reforms can just be planned by including facts and hoping for positive results. But in a coalition government, nobody will be willing to take that risk," said Arzova. The structural reforms were the only subject that every party and financial intuition called "a need" for Turkey to succeed to a higher growth rate and escape the middle-income trap. Arzova also said that while it was economics that directs politics, the politics now will direct the economics. "I don't believe a coalition government would last for a long time," said Arzova.

The Central Bank of the Republic of Turkey (CBRT) announced yesterday that the deposit interest rate for the dollar was reduced to 3.5 percent from 4 percent and the rate on euro deposits to 1.5 percent from 2 percent.

"Currently, there are two issues that are moving the markets. First is the uncertainty due to the election results. Coalition possibilities, and the consequent economic policy are important for the markets. These are downside risks for Turkish lira assets," Destek Securities Analyst Adnan Çekçen told Anadolu Agency. "But there is also a second issue. The Central Bank announced early this morning that foreign exchange deposit rates were lowered. This is a move intended to increase foreign exchange liquidity. The markets reacted, but more than that, markets perceived this move as a sign that the Central Bank is in the game again," he added.

Çekçen said: "From now on, there is a possibility of a rate hike by the Central Bank. A monetary policy meeting will be held on June 23. So although we price lira assets negatively for now, we will pay close attention to the Central Bank."

Business communities in Turkey also released statements regarding the election results, emphasizing the economic stability and realization of structural reforms. Foreign Economic Relations Board (DEİK) Chairman Ömer Cihad Vardan said that the business world is hoping that a government will be formed that will continue the success achieved, to complete the projects started, to initiate the programs and projects planned and to maintain the long-term goals of the previous government. It was further said that the new parliament should especially focus on new solutions for managing regional risks and solving social problems and on economic matters, as the most recent successes of Turkey were based on a secure and stable environment. It was further underlined that while various political uncertainties continue in the north and south of Turkey, no instability should be allowed within Turkey. Vardan also said that Turkey doesn't have time to waste and everyone should strive for the benefit of Turkey, while establishing a stable and safe environment for attracting investments and continuing with the structural reforms. Further, the need to focus on a new constitution and the EU membership process was also highlighted as two crucial areas the new government needs to focus on.

The president of the Union of Chambers and Commodity Exchanges of Turkey, Rifat Hisarcıklıoğlu, evaluated the election results and said, "We should focus on the economy and structural reforms, leaving busy elections days behind because it won't be a positive development to see uncertainties inside the country in an environment where the global financial climate is already full of uncertainties. We can overcome all the problems with a common mind, dialogue and joint working in an environment of reconciliation without forgetting that we are all in the same boat. We expect everybody to understand correctly the message that people gave and to prioritize the country's benefits in the upcoming period."

Another comment came from the president of the Independent Industrialists' and Businessmen's Association, Nail Olpak. "What we need as a business world is peace, trust, the progress of the positive stability and the continuation of growth and development movements. We expect the development gained to this day will not lose momentum and the new government, which is going to be established with the parliamentary arithmetic and a broad social base, to prepare its program and actualize its actions without rejecting the current acquisitions. The Turkish economy is so strong that it won't be affected by political fluctuations," he said in a written statement.

Meanwhile, International credit rating agency Standard & Poor's (S&P) evaluated the impact of the general elections on Turkey's credit ratings yesterday. It said that Turkey's credit ratings won't be affected immediately by the outcome of the general elections. S&P said in its statement that "We believe that the implementation of the last government's said objectives, including structural reforms outlined in its development plan, will depend on key cabinet appointments and whether the Justice and Development Party will choose to form a coalition or rule as a minority government." The rating agency emphasized that the negative outlook on the ratings stemmed from Turkey's uncertain growth prospects against a backdrop of high net external debt and long-standing pressure on institutional checks and balances. S&P also said that if Turkey's economic growth continued to rebalance and depended less heavily on external borrowing, they would revise Turkey's outlook to "stable." Commenting on S&P's statement, Arzova said that it is an unnecessary statement, since the credit rating agency should be evaluating the financial structures, not the democratic choices of the people, and Turkey is not the only country to be governed by a coalition government.
Last Update: Jun 09, 2015 12:25 am
RELATED TOPICS